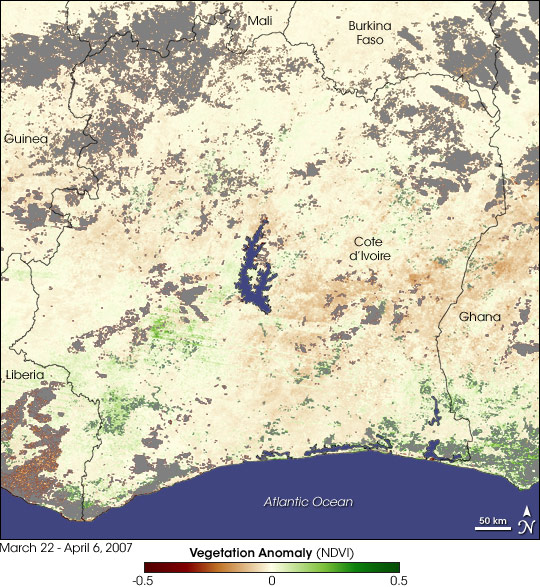 Drought settled over West Africa’s Ivory Coast region when wet season rains came late in 2007. Instead of beginning in February, the rainy season didn’t start until March, and steady rains didn’t start until late March, said the Famine Early Warning System Network. Though the rain had started to alleviate the drought, vegetation was still depressed in parts of Côte d’Ivoire (Ivory Coast) between March 22 and April 6, 2007, when the Moderate Resolution Imaging Spectroradiometer (MODIS) on NASA’s Terra satellite captured the data used to make this image. The image shows current vegetation conditions compared to average conditions recorded since 2000. Areas where plants are growing more slowly or more sparsely than average are brown, while areas where vegetation is denser than average are green. The brown tint that dominates the image indicates that plants through most of the country are more sparse than normal.

Among the crops affected by the lack of rain was West Africa’s cocoa crop. About 70 percent of the world’s cocoa comes from West Africa, and Côte d’Ivoire is a top grower, said Reuters. Cocoa prices climbed as the crop fell short. Farmers called the drought the worst in living memory, Reuters said. The delay in rainfall also led to water shortages in parts of Côte d’Ivoire, according to the United Nations Office for the Coordination of Humanitarian Affairs.