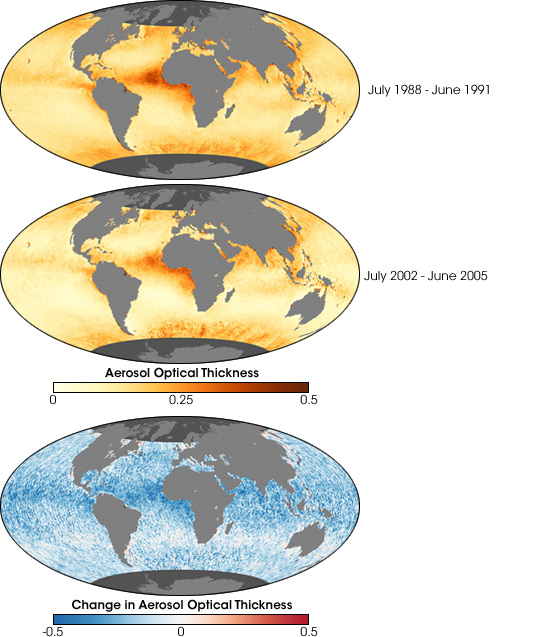 Each day, a blanket of tiny particles drifting through the Earth’s atmosphere filters out some of the sunlight headed for the planet’s surface. These aerosols, including dust, smoke, and human-produced pollution, can reflect incoming light or absorb it, directly affecting the Earth's energy balance and climate. Aerosols also influence the climate indirectly, by affecting the brightness and amount of clouds.

Because they block incoming sunlight from reaching Earth’s surface, aerosols may counterbalance greenhouse gas warming. The decline in the dimming power of aerosols over the past decade may have made the greenhouse warming trend more evident in the past decade than in previous decades. The scientists describe their results as a “likely” trend because the National Oceanic and Atmospheric Administration satellite sensors they used in their analysis were not specifically designed to observe aerosols, and may contain some errors. However, specific, major aerosol events, such as large volcanic eruptions, show up in the right place at the right time in the observations, and the data also agree with available ground-based observations. Ongoing NASA missions such as the Terra, Aqua, Aura, and Cloudsat/CALIPSO, as well as upcoming missions such as Glory, will provide the data scientists need to monitor aerosol trends over time.