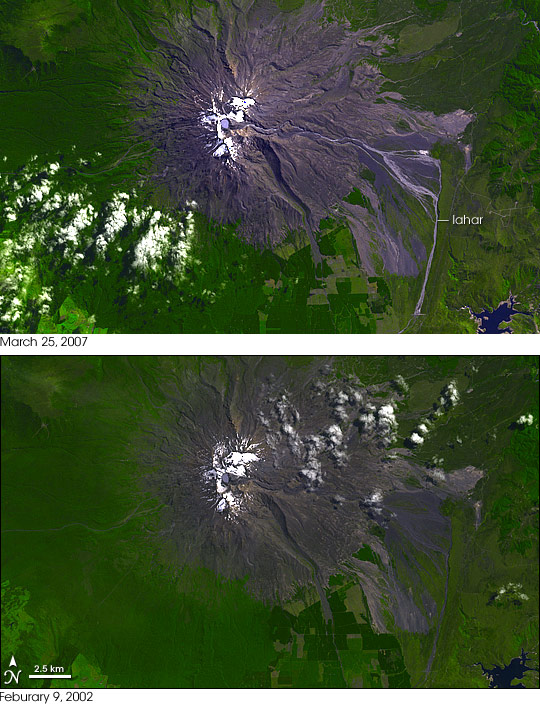 Hazards posed by volcanoes usually bring to mind lava flows and clouds of ash. Yet some of the worst hazards emerge long after the eruptions have stopped. Lahars are mudflows of water, volcanic ash, and volcanic rocks. Melting snow and rain can form lakes that sit heavily and uneasily in volcanic calderas. If the volcanic lake breaks through the surrounding rock, a lahar pours down the volcano’s flank. Some lahars have been observed moving at 65 kilometers (40 miles) per hour, easily outpacing people and animals trying to outrun them.

Lahars present an ongoing threat to those living around New Zealand’s Mount Ruapehu. On March 18, 2007, one such slurry burst out of Mount Ruapehu’s caldera and flowed down the side of the volcano. Seven days later, on March 25, 2007, the Advanced Spaceborne Thermal Emission and Reflection Radiometer (ASTER) on NASA’s Terra satellite captured the top image of Mount Ruapehu and its new lahar. For comparison, an earlier image, from February 9, 2002, appears below.

In both images, green indicates vegetation, dark blue indicates water, and purplish-gray indicates bare rock or hardened lava. The splotches of white at the summit show snow cover, and the billowy white balls nearby are clouds. South of the volcano, straight lines and sharp angles outlining patches of green indicate cultivated crops. In the image from 2007, the lahar appears as a rivulet of pale grayish-lavender that flows from the summit toward the east, then turns south. Near the base of the volcano, the lahar path separates briefly into two streams.

According to The Press, based in New Zealand, a small slurry flowed down the mountainside around midmorning, followed by a larger lahar about 15 minutes later. Described by one eyewitness as a “big gray snake,” the mudflow formed a river 30 to 40 meters (100 to 130 feet) wide and rose 6 to 8 meters (20 to 26 feet) over an access bridge. The lahar struck at the same time torrential rains struck the west coast of the island nation, and rain likely played a role in pushing the lahar out of the caldera.

In 1953, just minutes before a passenger train approached, a massive lahar from the volcano smashed a railway bridge. The train drove straight into the water and 151 people died. Concerns about future loss of life caused local scientists and authorities to plan an early-warning system. The early warning system was put to the test during the March 18 event, and local authorities expressed relief that the lahar traveled the predicted path and that the early warning system worked as planned.

Lahars present an ongoing threat to those living around New Zealand’s Mount Ruapehu. On March 18, 2007, one such slurry burst out of Mount Ruapehu’s caldera and flowed down the side of the volcano.