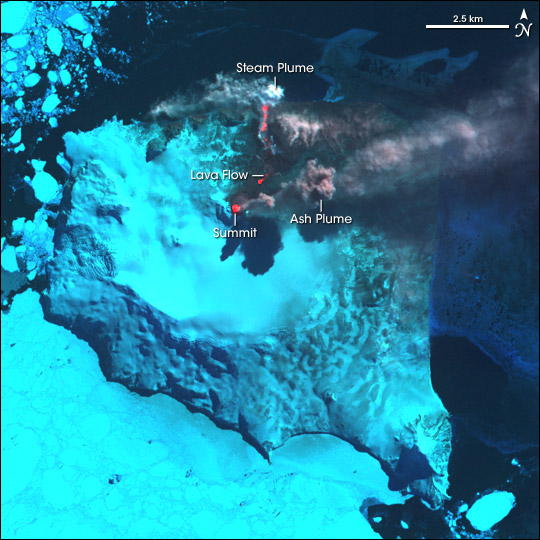 The first recorded eruption of Mount Belinda Volcano, on Montagu Island in the remote South Sandwich Islands, began in October 2001. The eruption was first detected by the MODIS Thermal Alert System (MODVOLC), an automated volcano alert system based on thermal anomalies, or “hot spots,” detected in satellite data. The first visual confirmation of the eruption came from ships that passed the islands in February and March 2003, at which time the volcano was still erupting.

The Advanced Spaceborne Thermal Emission and Reflection Radiometer (ASTER) flying onboard NASA’s Terra satellite captured this image of Mount Belinda on September 23, 2005. In this false-color image, red indicates hot areas, blue indicates snow, white indicates steam, and gray indicates volcanic ash. An increase in activity in the fall of 2005 has produced an active 3.5-kilometer-long lava flow, extending from the summit cone of Mount Belinda all the way down into the sea. The flow spreads northeast from the volcanic vent, and then becomes diverted due north by a narrow, rocky ridge, or arete. A 90-meter-wide lava channel appears 1 kilometer from the summit. Where the hot lava reaches the ocean, the water sends up a steam plume. On October 11, 2005, the crew of a British Royal Air Force flight observed a steam plume in the same area, suggesting the lava was still flowing.

Mount Belinda has been in a persistent state of eruption since 2001, and is now entering its fifth year of activity. Far from slowing down, the activity throughout 2005 marks the highest levels yet, according to MODVOLC. The volcano’s radiant heat output spiked near the beginning of the year and again in the autumn (Northern Hemisphere). Mount Belinda is a stratovolcano, a steep volcano built from hardened lava flows and volcanic ash over a period of tens to hundreds of thousands of years. Its fiery summit is surrounded by ice. Not far from the frigid continent of Antarctica, the South Sandwich Islands are one of the Earth’s most remote areas of volcanic activity. Consequently, they are rarely viewed from the ground; remote sensing plays a vital role in monitoring this highly active volcanic arc.