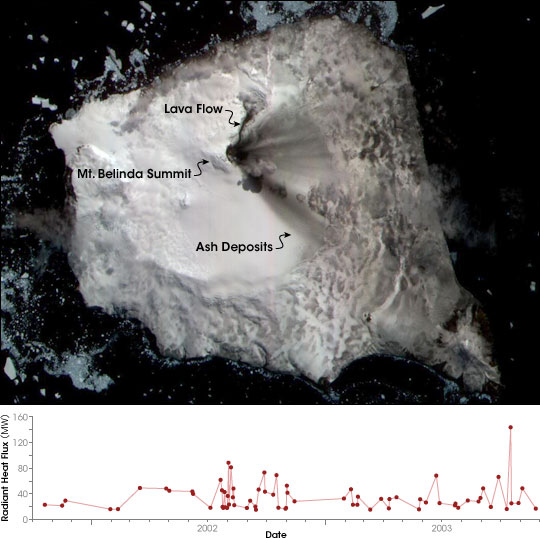 On October 20, 2001, the satellite monitoring system (called “MODVOLC”) at the University of Hawaii-Manoa detected the first recorded eruption of Mount Belinda volcano on Montagu Island in the remote South Sandwich Islands. Scientists were able to detect the heat escaping from Mount Belinda using thermal data from the Moderate Resolution Imaging Spectroradiometer (MODIS), flying aboard NASA’s Terra and Aqua satellites.

Above is a false-color image acquired on December 7, 2003, by the Advanced Spaceborne Thermal Emission and Reflection Radiometer (ASTER), another sensor onboard Terra. The image (made using ASTER bands 3, 2, and 1) shows that the eruption of Mount Belinda has progressed steadily for an impressive two years, with low-level ash emission and a 2-kilometer-long lava flow darkening the ice shelf on the north side of the summit.

Heat output from the volcano, which is an automated product of the MODVOLC system, is shown in the graph below. The tick marks on the graph are monthly intervals beginning at the origin (zero-point at left end of graph) in October 2001 and ending with November 2003. The plot indicates that, far from diminishing after its initial eruption in 2001, the eruption reached its highest intensity in October 2003.

The South Sandwich Islands, situated approximately between the southern tip of South America and mainland Antarctica, comprise one of the most remote volcanic areas on Earth. Due to this inaccessibility, satellite monitoring is the only viable means to keep track of this highly active volcanic arc.