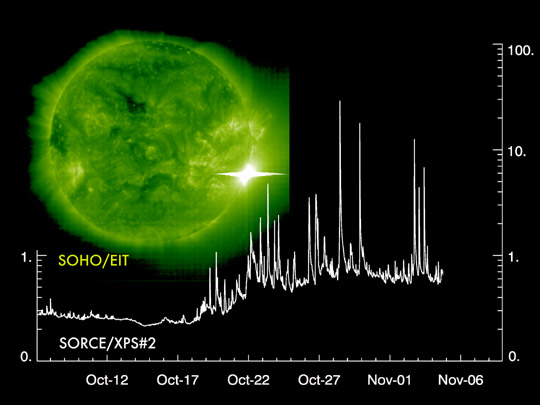 NASA’s Solar Radiation and Climate Experiment (SORCE) satellite reached a major milestone recently by completing the first year of its mission to gather the most comprehensive measures ever made of the Sun’s total energy . With its payload of four onboard sensors, the SORCE satellite “sees” the Sun’s energy output across the broadest range of the color spectrum ever looked at from a single platform—measuring wavelengths of solar energy from 1 to 3000 nanometers. SORCE has been measuring the Sun’s energy arriving at the Earth at each of these many wavelengths every few minutes for the past year, and scientists expect it to continue making such measurements for many years to come. (Read the NASA press release for more details.)

The image above combines data from the Extreme ultraviolet Imaging Telescope (EIT) aboard NASA’s Solar and Heliospheric Observatory (SOHO) satellite with data from the Extreme Ultraviolet Photometer System (XPS) onboard SORCE. The SOHO image shows the solar disk in shades of green. The brighter the shade of green, the greater the energy output (at 195 nm wavelength). The particularly bright feature toward the Sun’s lower right horizon in this image shows the location of an intense solar flare.

The white line graph beneath the image of the Sun shows SORCE measurements of X-ray solar output from October 7, 2003, through November 5, 2003. There were were a number of large solar flares during this time span, as indicated by the sharp upward spikes in the SORCE measures of solar output between Oct. 28 and Nov. 3. (The SORCE data shown here represents solar output in the soft X-ray and far ultraviolet part of the spectrum, relative to the Sun’s “normal” output at that region of the spectrum.)

Astronomers and Earth scientists alike are interested in better understanding our Sun and why it undergoes changes in its energy output. In terms of the Earth’s climate, the Sun provides our world’s only truly external forcing. Other forcings such as those due to greenhouse gases and aerosols, are impacted by human society’s activities, but also have impacts that are more difficult to estimate because they are internal to the Earth system, and so can be changed by the very changes they cause, through various “feedback” mechanisms that are uncertain. The Sun’s forcing of Earth gives scientists a unique opportunity to study Earth’s sensitivity without needing to worry about uncertain feedbacks. Thus Sun-Earth studies may lead to a better understanding of the impacts of more complex human-induced forcings and, therefore give humans a better chance to adapt and perhaps mitigate negative impacts of climate change.

(Read the SORCE Fact Sheet for more details about the mission.)