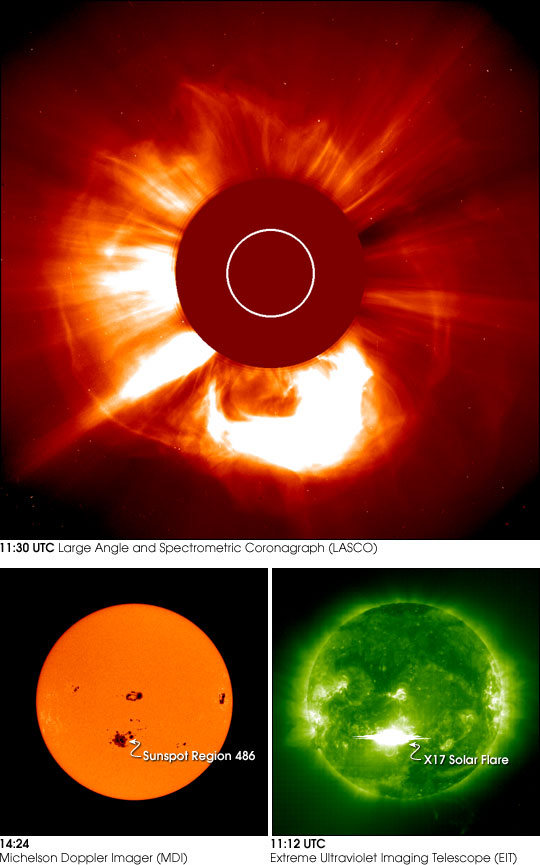 A massive solar flare erupted from the surface of the Sun at 9:51 UTC on October 28, 2003. The solar flare persisted for more than an hour, peaking at 11:10 UTC. Associated with the flare was an ejection of a billion tons or more of gas from the Sun’s tenuous outer atmosphere, or corona. Both the flare and the coronal mass ejection accelerated electrically charged particles to very high energies and hurled them at near the speed of light directly toward the Earth. It takes light roughly 8 minutes to travel from the Sun to Earth, and these particles made the trip in less than an hour. NOAA is predicting that the coronal mass ejection will hit the Earth’s magnetosphere sometime early tomorrow (Oct. 29), probably at or before 12 noon UTC. (Click to visit the NOAA Space Environment Center’s Space Weather Web site for more details.)

The images above show the event from the perspective of three different satellite sensors. The top image was acquired by the Large Angle and Spectrometric Coronagraph (LASCO), aboard NASA’s Solar and Heliospheric Observatory (SOHO) satellite. In the center of the image is an occultation disc, which allows the sensor to focus on the scattering of light from the Sun’s surface off the free electrons in the Sun’s corona. This light appears as the orange halo seemingly radiating outward from the Sun. (The white circle on the occultation disc shows the actual size and location of the solar disc). Note the bright white features extending from beneath and to the left of the Sun. These are today’s coronal mass ejections, which appear to be heading directly toward the Earth.

The bottom left image shows the Michelson Doppler Imager (MDI) view of the Sun’s visible surface. The dark patches are sunspots, which are a tepid 4,000 Kelvin—much cooler than the Sun’s typical surface temperature of 6,000 Kelvin. The bottom right scene shows the view from the Extreme Ultraviolet Imaging Telescope (EIT). This sensor shows the light from a single ionized species of iron that is formed at about 1.5 million Kelvin high in the Sun’s corona. Today’s solar flare appears as the bright green-white feature toward the bottom left of the solar disc.

To put this event in perspective, NOAA predicts the impacts of the coronal mass ejection on the Earth’s magnetosphere will be a “4” (severe) on a scale of 1 to 5. The flare is the third largest ever recorded in the 30 years since NOAA began observing soft X-ray emissions from the Sun. Today’s flare is listed as an X17.2, with an X20 being the most intense flare ever observed in that time. People living in Quebec, Canada, may recall that in March 1989 an X15 solar storm was strong enough to knock out the region’s power grid.

Officials say it is possible that people in the Southern Hemisphere will see aurorae at much lower latitudes than usual on Oct. 29, when the coronal mass ejection reaches Earth. It is also possible that people could experience problems using telecommunications devices, such as satellite phones and pagers. In May 1998, for example, the commercial Galaxy IV satellite was damaged by a solar storm, knocking out its ability to support telecommunications.

For more images from the SOHO mission, please see http://sohowww.nascom.nasa.gov/hotshots/2003_10_28/. To learn more about NASA’s ongoing studies of the Sun-Earth connection, please read A Violent Sun Affects the Earth’s Ozone.

A massive solar flare erupted from the surface of the Sun on October 28, 2003 and again on November 4, 2003. Associated with each flare was an ejection of a billion tons or more of gas from the Sun's tenuous outer atmosphere, or corona.