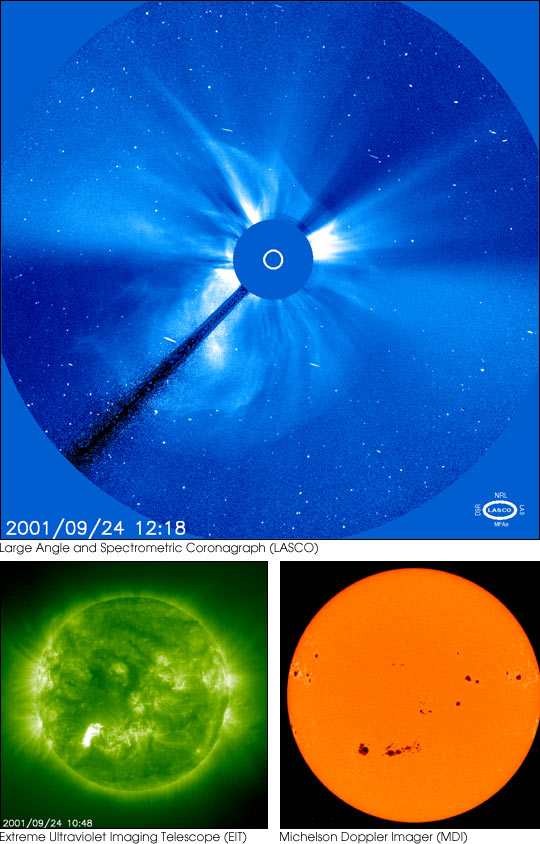 At 10:40 UTC on September 24, 2001, a large solar flare erupted from the surface of the sun. Pointed almost directly towards the Earth, the flare caused a coronal mass ejection (CME). Coronal mass ejections are composed of fast-moving clouds of ionized gas. These energetic particles can interfere with wireless communications, damage satellites, disrupt the transmission of electricity, and energize the Earth’s upper atmosphere, causing auroras.

The images above show several views of the solar flare and coronal mass ejection from the Solar and Heliospheric Observatory (SOHO). SOHO sits between the Earth and the sun, allowing an uninterupted view of solar activity. The top image shows the recent coronal mass ejection about 100 minutes after the solar flare. From the satellite’s perspective, glowing gas appears to surround the sun as it speeds towards Earth. The lower left image shows the flare itself. The Extreme Ultraviolet Imaging Telescope acquired that image at 304 Angstroms. At lower right is an image of the sunspot group (lower left) that spawned the flare.

Courtesy of SOHO/LASCO, SOHO/EIT, and SOHO/MDI consortium. SOHO is a project of international cooperation between ESA and NASA.