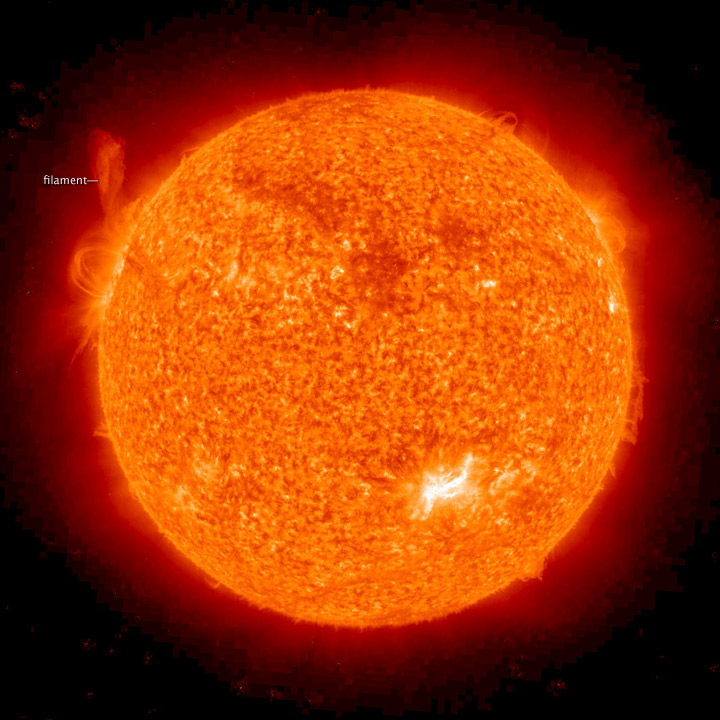 Spectacular aurora lit the night sky from Europe to North America on August 3, 2010, thanks to a 12-hour long geomagnetic storm. The storm occurred as large clouds of charged particles from the Sun interacted with the magnetic field around Earth. As the particles zoomed along the magnetic field, they collided with and energized oxygen and nitrogen in the atmosphere. When the energized atoms relaxed, they emitted light, providing a brilliant show.

The light display on August 3 started with a solar storm on August 1. This image, from NASA’s Solar Terrestrial Relations Observatory (STEREO) Ahead telescope, shows a small flare leaving the Sun in the upper left side of the image.

The flare and the coronal mass ejection were just two symptoms of solar activity on August 1. An animation, made from data from NASA’s Solar Dynamics Observatory shows filaments of magnetism looping off the surface and a wave moving across the face of the Sun. Other activity on August 1 included large-scale shaking of the solar corona, radio bursts, and more.

The Sun goes through a regular activity cycle that lasts about 11 years, cycling between activity (solar maximum) and quiet (solar minimum). The last solar maximum was in 2001 followed by a long period of very little activity. The eruptions are among the first signs that the Sun is waking up and beginning to move towards another solar maximum, expected to occur in about 2013.