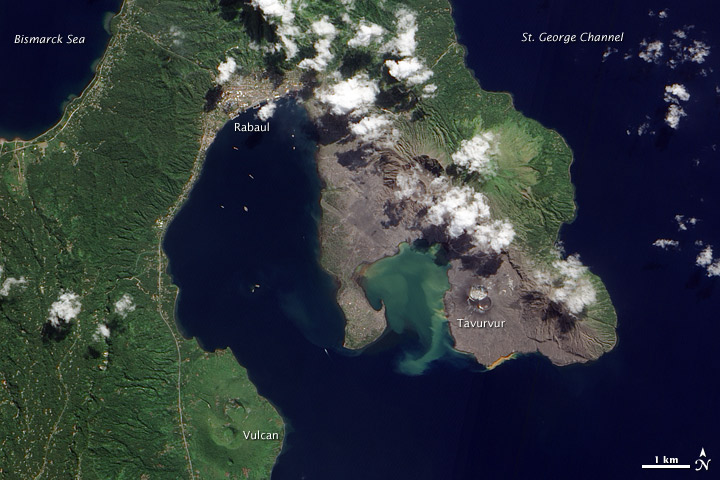 Volcanic cones and settlements mingle along the margins of the Rabaul Caldera on the northeastern tip of Papua New Guinea’s New Britain Island. Shaped like a giant cauldron, the caldera is the remaining rim of an ancient volcano. Small volcanic cones, some of which are still active, sit on the rim. Spanning roughly 8 by 14 kilometers (5 by 9 miles), the caldera is flooded by Blanche Bay. The largely submerged caldera long formed a natural harbor for what had been New Britain’s largest city, but a major eruption forced the evacuation of Rabaul City in 1994. Although the city ceased to bustle with activity, at least one volcanic cone remained active for years afterward.

Sparse cloud cover allowed the Advanced Land Imager (ALI) on NASA’s Earth Observing-1 (EO-1) this view of Rabaul Caldera on June 14, 2010. The landscape appears as a mixture of vegetated and bare ground. Vegetation almost completely coats the western side of Rabaul Caldera. Volcanic cones line the northeastern margin of the caldera, and around these cones, the land is mostly rocky and barren.

Tavurvur, near the southern end of the exposed caldera rim, was one of the volcanoes to erupt explosively in 1994. The other was Vulcan, on the western side of the caldera. While vegetation has revived on the slopes of Vulcan, rocks predominate at Tavurvur, evidence of more recent eruptive activity.

Remnants of settlements linger along the caldera’s northwestern margin and on a promontory near the caldera’s center. Prior to the explosive eruption in 1994, the city of Rabaul and been the provincial capital of East New Britain. After the eruption, the capital was moved to the coastal city of Kokopo, some 20 kilometers (12 miles) to the southeast.