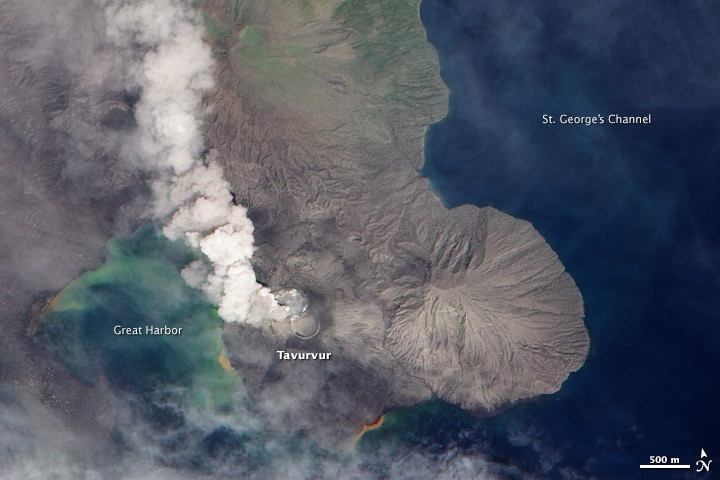 Since a major eruption in 1994 that forced the complete evacuation of the nearby city of the same name, Rabaul Volcano on the island of New Britain has remained intermittently active. Rabaul is a large caldera volcano whose eastern rim has been breached and flooded by the sea. Numerous vents and cones occur around the rim, including Tavurvur Cone, which was erupting when this image was captured by the Advanced Land Imager on NASA’s Earth Observing-1 (EO-1) satellite on November 30, 2009.

From November 20–26, strong eruptions from Tavurvur shot ash plumes 1.5 kilometers into the air above the summit and “showered the flanks with lava fragments that were incandescent at night,” according to a report from the Rabaul Volcano Observatory posted on the Smithsonian Global Volcanism Website.

A caldera volcano forms when a massive eruption empties the magma chamber underlying the volcano; the overlying rock and debris sink into the chamber, leaving a crater at the surface. The eruptions that formed Rabaul Caldera took place as recently as 3,500 and 1,400 years ago.

The 1994 eruption that buried Rabaul involved the currently active Tavurvur Cone as well as Vulcan Cone, located across Blanche Bay to the southwest (not pictured) The city of Rabaul is located on the peninsula across the Great Harbor from Tavurvur. More than a foot of ash fell on parts of the city, and combined with rain, it collapsed many of the small city’s buildings and houses. White dots on the peninsula may be buildings or building sites.

Forests west of Mount Tavurvur got a fresh coat of ash after Rabaul volcano erupted explosively on August 29, 2014.