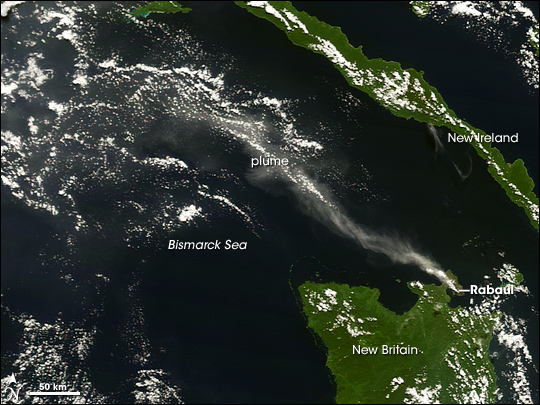 Rabaul Volcano continued emitting a plume of ash and/or steam on May 29, 2008, as the Moderate Resolution Imaging Spectroradiometer (MODIS) on NASA’s Terra satellite passed overhead. This image shows the plume snaking toward the northwest, away from the volcano’s summit and over the Bismarck Sea. The plume differs from the nearby clouds in that it is slightly darker with more diffuse outlines. The clouds, in contrast, are well-defined, opaque white dots. Small clouds appearing at the volcano’s summit might result from water vapor released by Rabaul.

Rabaul is a pyroclastic shield volcano that resembles an ancient warrior shield, thanks to its low, broad shape. Assembled from pyroclastic flows (avalanches of broken rocks, volcanic ash, and other materials), it shows evidence of earlier eruptions. Rabaul’s explosive 1994 eruption, occurring at the same time as eruptions of two neighboring volcanoes, forced the temporary evacuation of Rabaul City. Before that, Rabaul City had used the sheltered harbor formed by the volcano.

Rabaul Volcano, on the northeastern tip of the island of New Britain, released a plume on May 20, 2008.