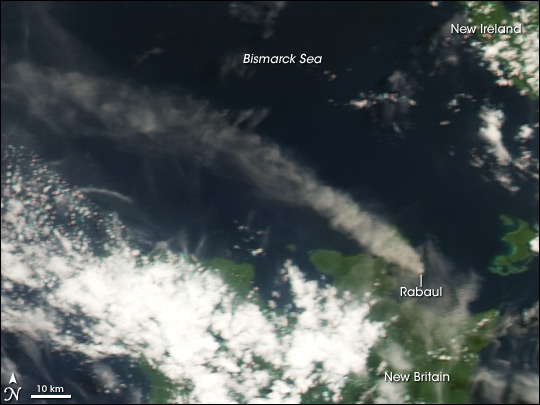 Continuing a pattern of intermittent activity that lasted several days, the Rabaul Volcano on Papua New Guinea’s island of New Britain released a plume on March 18, 2008. This image of the eruption was captured by the Moderate Resolution Imaging Spectroradiometer (MODIS) on NASA’s Aqua satellite that afternoon.

This image shows the plume from Rabaul blowing northwest over the Bismarck Sea, gradually dissipating as it moves. Although light in color, the plume is not pure white; volcanic ash likely mingles with water vapor in the volcano’s emissions. Much brighter than the plume, opaque white clouds hover over the lush green islands of New Britain and neighboring New Ireland. Volcanic ash may have mixed with the clouds west of New Britain.

Rabaul Volcano sits on the end of the Gazelle Peninsula on the northeast end of New Britain. It is a pyroclastic shield volcano, meaning it is formed by ash, pumice, rock fragments, and other leftovers from earlier eruptions, and its flat shape resembles an ancient warrior shield. Only 688 meters (2,257 feet) tall, Rabaul has a low profile, and the caldera had formed a natural harbor for what once was New Britain’s biggest city. In 1994, Rabaul—along with two other volcanoes, Vulcan and Tavurvur—erupted strongly enough to require a short-term evacuation of Rabaul City.

You can download a 250-meter-resolution KMZ file of Rabaul suitable for use with Google Earth.

Rabaul Volcano released a plume on in early March 2008. It continued a pattern of intermittent activity for several days.