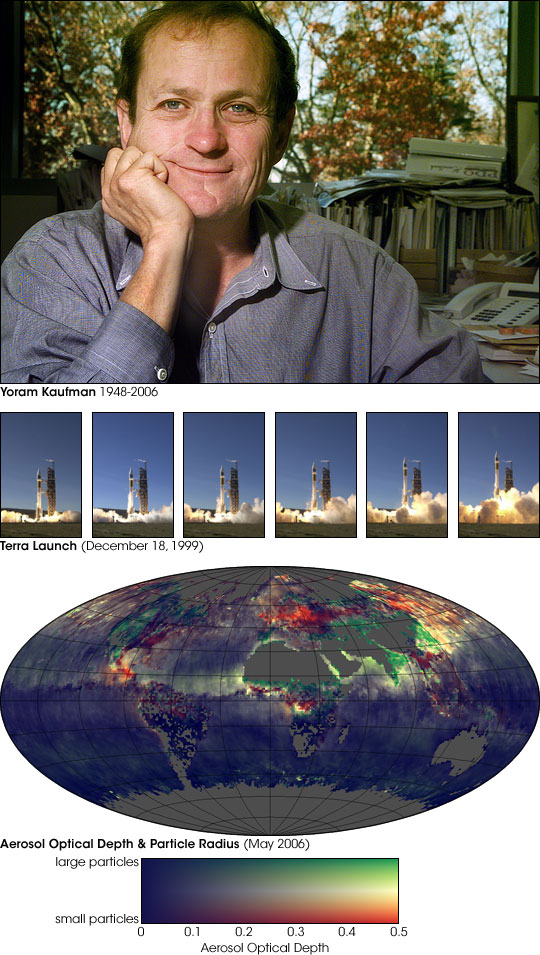 Teams for the MISR and CERES instruments did not record data for a full minute on Sunday, June 4, as NASA’s Terra and Aqua satellites flew over Goddard Space Flight Center in Greenbelt, MD. Likewise, the POLDER instrument aboard the French Space Agency’s (CNES) PARASOL satellite and a global network of upward-looking sensors (called sun photometers) within NASA’s Aerosol Robotic Network (AERONET) remained inactive during that same span. Each of these instruments observed a moment of data “silence” in honor of Dr. Yoram J. Kaufman. A pioneering climate researcher, Kaufman died on Wednesday, May 31, from injuries he received in a collision with a car while biking near the NASA Goddard campus on May 26.

Kaufman was a highly-regarded Senior Fellow in the Goddard Earth-Sun Exploration Division, where he worked from 1979 to 2006 on a number of high-profile NASA missions and research projects in the Earth sciences. From 1997 to 2001, Kaufman served as Project Scientist for the Terra mission, the first of three “flagship” satellites in NASA’s Earth Observing System. Kaufman oversaw the science aspects of the mission in the critical days leading up to and following Terra’s launch. Kaufman also served as program manager for NASA’s Earth Observatory Website from its original publication date of April 29, 1999, through January 2006. It was his creative genius and leadership that led to the site’s conception and establishment.

Kaufman’s professional passion was his research on atmospheric aerosols, tiny solid and liquid particles in the atmosphere. Aerosols occur naturally—due to wildfires, volcanic eruptions, dust storms, suspended salts from sea spray, and plant respiration—and they are produced by humans—including emissions from cars, factories, biomass burning, and agricultural dust. Aerosols are important because they represent an area of uncertainty within Earth’s climate system. Kaufman’s research contributed greatly to scientists’ understanding of the myriad roles of aerosols in the climate system. “Aerosols are a ‘wild card’,” Kaufman once explained. “They are hard to predict because they act like double agents in the system.”

His point was that aerosols can cause warming or cooling of Earth’s surface, depending upon their size, type, and location. Certain aerosols cool the surface by scattering and reflecting sunlight back to space; whereas dark-colored aerosols absorb more sunlight than they reflect, thus helping to warm their environment. Aerosols can enhance cloud formations and make clouds brighter, whiter, and longer-lived; or they can suppress cloud formations by interfering with the process of convection. Within clouds (again depending upon their size, type and location) aerosols can intensify precipitation, or they can suppress it. When inhaled into the lungs, particle pollution can be a health hazard to humans, having been linked to such medical conditions as asthma, poor lung development in children, cancer, and even increased risk of heart attack.

A number of NASA’s satellite missions were specifically designed to help scientists study aerosols. Three of the instruments aboard Terra, for example, were designed to measure some of the physical properties of these airborne particles. The MODIS and MISR instruments measure the particle size, altitude, travel velocity, reflectance, and “optical thickness” of aerosol plumes. (Optical thickness is a unitless measure of the amount of sunlight that is scattered and absorbed by aerosols, and thus prevented from traveling down to the surface through a column of atmosphere.) The bottom image (above) shows a 1-month global average of aerosol optical thickness, measured by MODIS in May 2006. An optical thickness of less than 0.1 (blue) shows areas with not much aerosol, whereas an optical thickness of 0.3 or more (dark reds, greens, and tans) show areas where aerosols were in abundance.

The colors used in this global map have two meanings. In addition to showing optical thickness, the colors also show the relative size of the aerosol particles. Reds show plumes of smaller particles (less than 1 micron in radius), and greens show plumes of larger particles (greater than 1 micron). Tan areas show where both large and small particles were intermingling. Dark gray shows no data, either due to persistent cloudiness, polar darkness, or where MODIS could not make its measurement over very bright surfaces such as deserts and snow-covered regions. Depending upon their location and concentrations, the colors in these maps can help scientists distinguish natural aerosols (greens) from human-produced particle pollution (reds). Human pollution particles tend to be smaller in size, usually the result of combustion from such sources as power plants, factories, and regions of biomass burning. Natural aerosols, such as sea salts and desert dust, tend to be larger in size.

The amount and wavelength of the light reflected by aerosols varies as a function of the particles’ size, type, and abundance. Kaufman’s team exploited this understanding by using the MODIS instrument to measure how much light at certain wavelengths is reflected and absorbed by the aerosols all over the world, thus allowing his team to derive optical thickness and particle size. The team then automated the collection and processing of MODIS’ measurements to produce daily and monthly global aerosol “data products,” such as the false-color map shown above.

Kaufman will be remembered as a brilliant scientist, a charismatic leader, and a positive influence within NASA. He collaborated with many scientists around the world in helping to advance our understanding of Earth’s climate system. In the days before his untimely death, Kaufman was not yet aware that he had been selected by the American Meteorological Society to receive its prestigious Verner E. Soumi Award, which is granted to one individual each year in recognition of highly significant technological achievement in the atmospheric (or related) sciences. We are deeply saddened to lose a valued friend, mentor and leader, and we are proud of Kaufman’s considerable accomplishments.