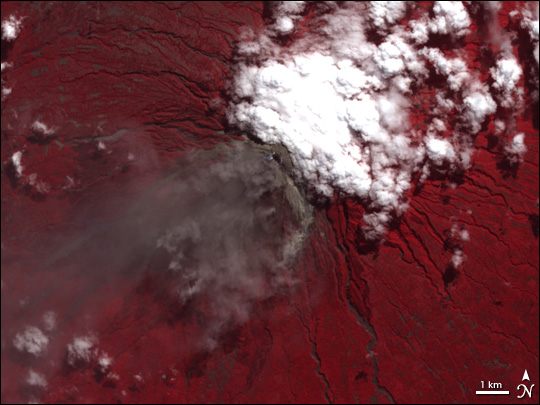 Just 10 days after a major earthquake struck the region and left roughly 340,000 people homeless, Mount Merapi erupted, on June 6, 2006. The volcano, which had been active since April, sent lava and hot gas down its slopes and prompted the evacuation of 11,000 villagers, according to the Times Online. The Advanced Spaceborne Thermal Emission and Reflection Radiometer (ASTER) on NASA’s Terra satellite captured this image of the volcano on June 6. In this false-color image, red indicates vegetation, and the brighter the red, the more robust the plant life. Clouds appear as bright, opaque white, and the volcanic plume appears as a dingy gray cloud blowing toward the southwest. The Moderate Resolution Imaging Spectroradiometer (MODIS) captured a different view of this volcano on the same day.

Mount Merapi is a stratovolcano composed of layers of hardened lava, ash, and rocks from previous eruptions. The New York Times reported that while many expected the volcano’s lava dome to collapse, the lava dome that formed in May 2006 did so under the remains of older lava domes, making it harder to dislodge. As of early June, vulcanologists and local inhabitants were still warily waiting for the volcano’s next move.

Volcanoes often produce fertile soil, so lush vegetation is common on volcanic slopes, and fertile soils attract people who want to farm the land and raise livestock. Merapi occupies a densely populated region, so its activity affects thousands of people. According to the New York Times, thousands of locals refused to leave their homes or livestock. Thousands more obeyed earlier evacuation orders then returned, only to suffer from the earthquake.