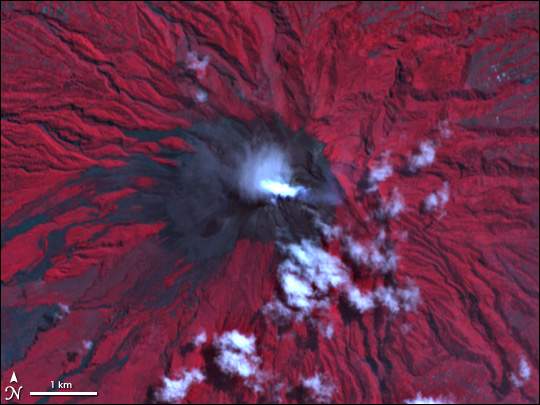 Frequent earthquakes and plumes of sulfur-laden gas indicated that Mt. Merapi was gearing up for an eruption in late April 2006. The volcano is one of Indonesia’s most active and dangerous volcanoes. The slopes of the volcano are densely populated, with four districts clustered on its flanks. As many as 80,000 people may be displaced if the volcano erupts, depending on which way the lava flows down the summit, reported the United Nations Office for the Coordination of Humanitarian Affairs (OCHA). Thousands of people who live near the volcano had been evacuated by April 27, and more were preparing to leave as the volcano continued to rumble. An eruption in 1994 claimed at least 66 lives, and a 1930 eruption killed 1,370.

The Advanced Spaceborne Thermal Emission and Reflection Radiometer (ASTER) on NASA’s Terra satellite captured this image of the volcano on April 26, 2006. A light plume of steam rises from Merapi’s summit, which is surrounded by dried rivers of black lava and debris from previous eruptions. Vegetated land farther down the slopes of the volcano is red in the false-color image. The light-grey squares around the outer edge of the image are sections of cleared land, possibly populated regions.

This visualization shows the approximate location of an avalanche of hot ash and volcanic gas flowing down Indonesia’s erupting Mount Merapi volcano on October 30, 2010.