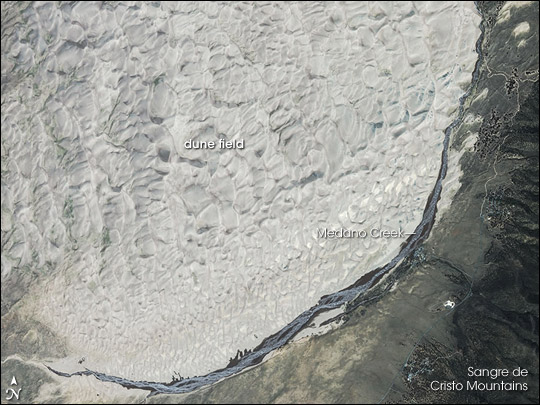 The tallest sand dunes in the United States sit in southern Colorado. Each year, some 300,000 people visit these dunes, which cover roughly 70 square kilometers (30 square miles). The tallest dunes rise to a height of about 230 meters (750 feet), and although it isn’t easy, it’s possible to hike to the top of some of the dunes. They rest in the San Luis Valley, not far from the Sangre de Cristo Mountains. A long-time attraction for locals and tourists, this area was designated as a national park on September 13, 2004.

GeoEye’s IKONOS sensor took this picture of the Great Sand Dunes National Park on July 17, 2005. The dunes nestle inside the curve of the Sangre de Cristo Range to the east. The blue sliver curving around the southeast corner of the dunes is Medano Creek. In marked contrast to the nearby mountain range, the dunes are silvery beige, their ripples gradually dissipating from east to west.

A couple explanations have been offered for why so many dunes formed in this spot. One suggestion is that the sand was deposited by the Rio Grande, though this raises the question of why sand dunes don’t line the river’s entire path. Another explanation is that the sand for the dunes has been deposited by a lake that periodically forms and dries up, based on climatic conditions. Shifting winds have contributed to the dunes’ height. If wind consistently blows from one direction, sand dunes typically migrate, keeping their short stature as they go. If wind blows from multiple directions, the sand can pile up on top of the dune, building its stature over time.