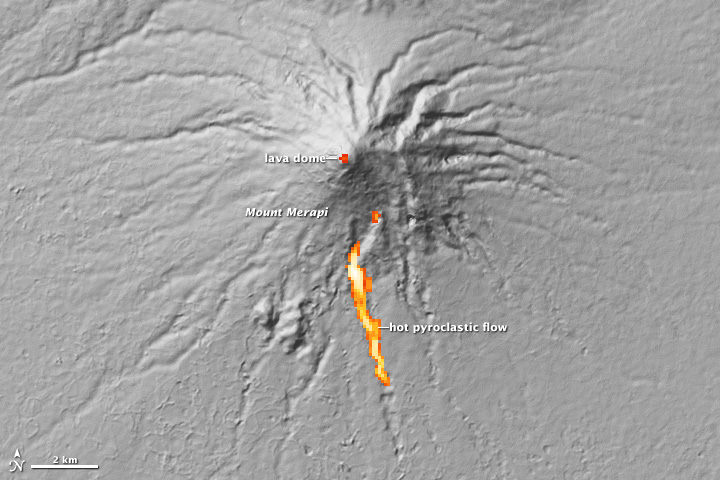 The steep-sided, cone-shaped Mount Merapi volcano is both boon and curse to the people of Indonesia. Volcanic ash from its frequent eruptions makes the soil fertile enough to support a large population. It is also one of Indonesia’s most active volcanoes, posing a constant threat to tens of thousands of people who live in its shadow. On October 26, 2010, the volcano once again turned destructive, unleashing a series of eruptions that had killed at least 44 people and forced 75,000 people from their homes, said CNN on November 4.

The mountain has been shrouded in clouds throughout the eruption, but on October 30 the Advanced Spaceborne Thermal Emission and Reflection Radiometer (ASTER) on NASA’s Terra satellite captured the thermal signature of hot ash and rock and a glowing lava dome. The thermal data is overlaid on a three-dimensional map of the volcano to show the approximate location of the flow. The three-dimensional data is from a global topographic model created using ASTER stereo observations.

The Center of Volcanology and Geological Hazard Mitigation reported that two pyroclastic flows moved down the volcano on October 30. A pyroclastic flow is an avalanche of extremely hot gas, ash, and rock that tears down the side of a volcano at high speeds. ASTER imaged one of those flows.

Merapi shows no signs of slowing. After several days of eruptive episodes, the volcano began an eruption on November 3 that was five times more intense than on October 26 and lasted more than 24 hours. It is the most violent eruption at the volcano since the 1870s, said local geologists.

This visualization shows the approximate location of an avalanche of hot ash and volcanic gas flowing down Indonesia’s erupting Mount Merapi volcano on October 30, 2010.