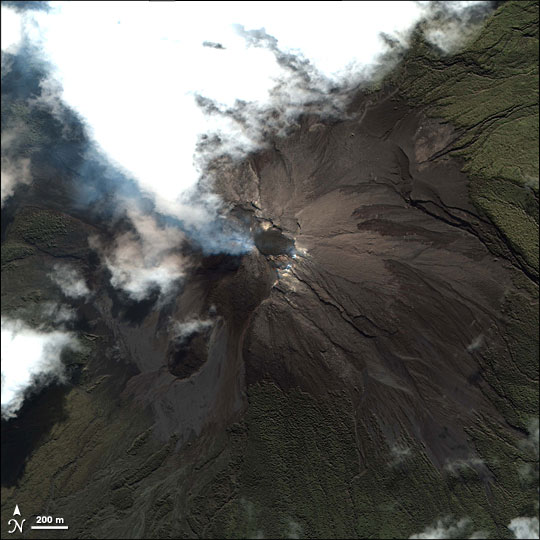 On the island of Java, Merapi Volcano ranks among Indonesia’s most active volcanoes. Merapi is a stratovolcano, composed of layers of hardened lava, volcanic ash, and rocks ejected by earlier eruptions. The area around Merapi is densely populated, and the volcano’s previous eruptions have claimed human lives and devastated cultivated crops.

Space Imaging’s IKONOS satellite acquired this image of Merapi Volcano on May 11, 2006. In this image, what looks like a faint plume extends from the volcano’s summit toward the clouds overhead. The volcano’s surface tells a story of past eruptions with hardened rivers of rock making meandering trails down the steep slopes. Although the lower regions of Merapi Volcano are densely vegetated, the area around the summit is free of vegetation, thanks to recurring eruptions.

The volcano had rumbled for weeks before erupting in earnest in early May, sending a plume of scorching gas, rocks, and volcanic ash down its slopes. Days after this image was acquired, the volcano sent another cloud of hot gas 4 kilometers into the sky, according to news reports. 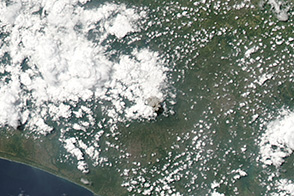