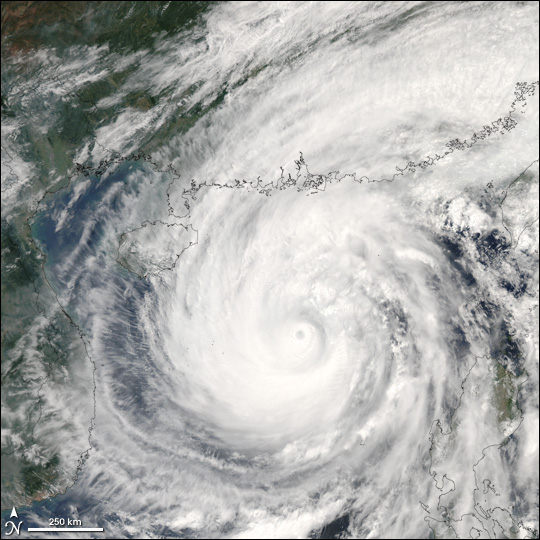 Tropical Storm Chanchu formed in the western Pacific on May 8, 2006, roughly 500 miles east of the Philippines. The storm gradually built strength and size, reaching typhoon strength by May 11. It lost some strength as it crossed the Philippines, but once clear of the islands, it regained power and became a typhoon, with powerful winds and a large cyclonic structure. The storm continued on a northwesterly track across the South China Sea towards the island of Hainan, located northwest of center in this image, and Southeast Asia, along the image’s left edge.

This photo-like image was acquired by the Moderate Resolution Imaging Spectroradiometer (MODIS) on the Aqua satellite on May 16, 2006, at 1:50 p.m. local time (05:40 UTC). The typhoon has a huge spiral-arm structure in this image, and a well-defined cyclone shape. It also had a distinct, but cloud-covered eye (sometimes known as a “closed eye”) in the center. The closed eye is slightly less cloudy than it appeared to MODIS two days earlier, indicating that the typhoon has continued to gain power: only the most powerful storms typically develop cloud-free “open” eyes. Sustained winds in the storm system were estimated to be around 200 kilometers per hour (125 miles per hour) around the time the image was captured, according to the University of Hawaii’s Tropical Storm Information Center.