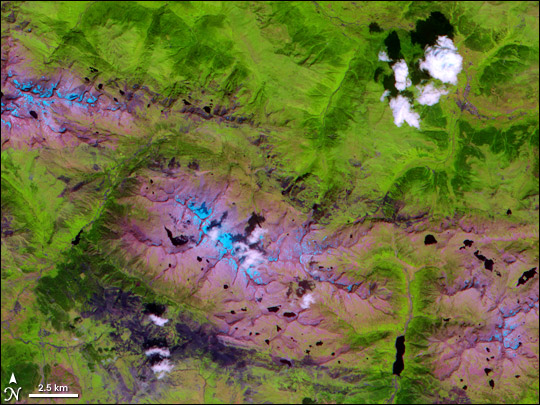 The Alps may be more famous, but the Pyrenees have been around much longer—tens of millions of years longer, in fact. These mountains formed between 100 and 150 million years ago when the landmass that Spain occupies pushed into the one that France occupies. The mountains have served as a natural barrier between the Iberian Peninsula (Spain and Portugal) and the rest of Europe ever since. Stretching east to west across 430 square kilometers (267 miles), the Pyrenees fall mostly within Spain’s borders, but also pass into the independent state of Andorra.

The Advanced Spaceborne Thermal Emission and Reflection Radiometer (ASTER) on NASA ’s Terra satellite captured this image of part of the Central Pyrenees—the highest part of the range—on August 1, 2000. In this false-color image, clouds appear white, snow appears pale blue, vegetation appears green, and bare ground appears as either pink or dark, bluish-purple. Water on the ground appears dark blue (or nearly black). In this shot, the vegetated areas are mostly to the north, and the peaks to the south are mostly bare rock. In the large image, patches of dark purple that are visible along rivers and in valley floors are probably developed areas.

As mountain peaks rise higher, the land they support rises above the treeline (the topmost elevation where trees can grow). At even higher altitudes, hardly any plants can survive at all, so the highest mountain peaks show just snow or bare rock. This mountain chain owes its ruggedness to granite, a volcanic rock that erodes slowly. The mountains also contain other rocks: gneiss and limestone. Glaciers didn’t act on the Pyrenees as extensively as they did on the Alps, so these mountains don’t sport big lakes left behind by glaciers. They do have water, however, including many small lakes and waterfalls.