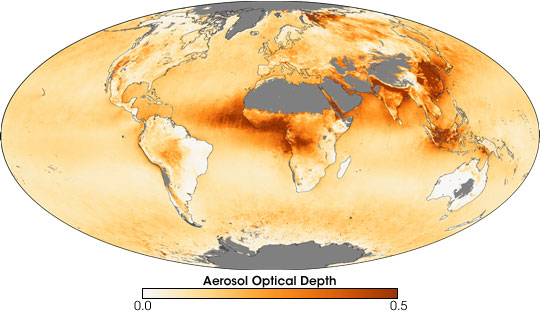 Aerosols are tiny particles, such as soot or dust, suspended in Earth’s atmosphere. In addition to their air quality impacts, aerosols can interfere with sunlight reaching the planet’s surface, which means they play a role in the climate. Remote-sensing scientists often talk about aerosols in terms of their optical depth, which indicates how much of the incoming sunlight aerosols prevent from reaching the Earth’s surface.

The Moderate Resolution Imaging Spectroradiometer (MODIS) flying on NASA’s Terra and Aqua satellites can detect aerosols, and this image shows the annual mean aerosol optical depth for 2006, based on daily measurements made by MODIS. In this image, white represents little or no aerosol interference with sunlight, and dark orange indicates considerable interference. Areas where data could not be collected appear in gray.

The global aerosol patterns in 2006 were similar to previous years. High aerosol concentrations were observed over western and central Africa (a mixture of dust from the Sahara and smoke from agricultural fires), northern India (where urban and industrial pollution concentrates against the foothills of the Himalaya Mountains), and northeastern China (urban and industrial pollution). Aerosol optical depth appeared unusually high in 2006 over Indonesia, probably as a result of increased fire activity there. The image also shows the impact of fires in Russia’s boreal forest, which spread aerosols into the Arctic.

The image isn’t a perfect representation of annual global aerosols because passive remote sensors (sensors that simply observe reflected light) like MODIS have trouble measuring aerosol interference over areas that are very bright because of clouds, snow, deserts, or sunglint (the direct reflection of sunlight into the sensor’s “eye.”) Because snow and ice cover can prevent accurate aerosol measurements in the winter months, the effect of summer events, such as the fires in Russia, are exaggerated. Likewise, aerosol measurements from the Amazon Basin, where slash and burn deforestation and other agricultural burning are widespread, are probably underestimated because of the region’s frequent cloudiness.