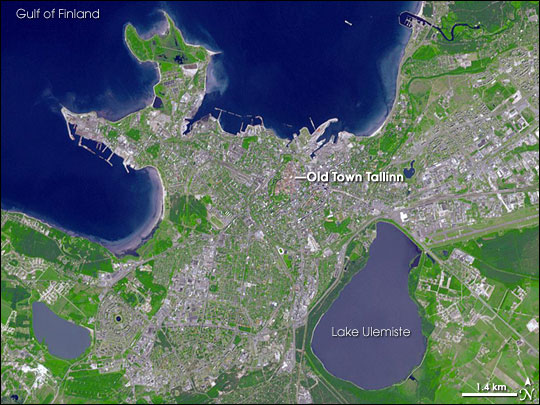 The historic seaport city Tallinn sits on the coast of Estonia, facing northward toward the Gulf of Finland. The country has a centuries-long history of occupation and foreign rule, having gained its final independence in 1991 with the collapse of the Soviet Union. Despite periods of warfare, much of the medieval heart of Tallinn, which is the national capital, remains intact. The narrow, cobbled streets, the red-tiled roofs of the buildings, and the spire-topped churches are so well preserved that the area, known as Old Town, was designated a United Nations World Heritage Site in 1997.

This image from the Advanced Spaceborne Thermal Emission and Reflection Radiometer (ASTER) on NASA’s Terra satellite shows Tallinn and the surrounding countryside on June 18, 2006. The modern developed areas in the scene appear mostly purplish gray, including the arcs and lines of major roads. The historic Old Town region reveals itself with a reddish tinge. On the precipice of summer, the forests and fields are varying shades of green, although some of the rectangular plots appear purplish, which suggests they may be flooded. Shallow or sediment-laden water in the image appears lavender. Deeper water in the Gulf of Finland and coastal bays appears blue.