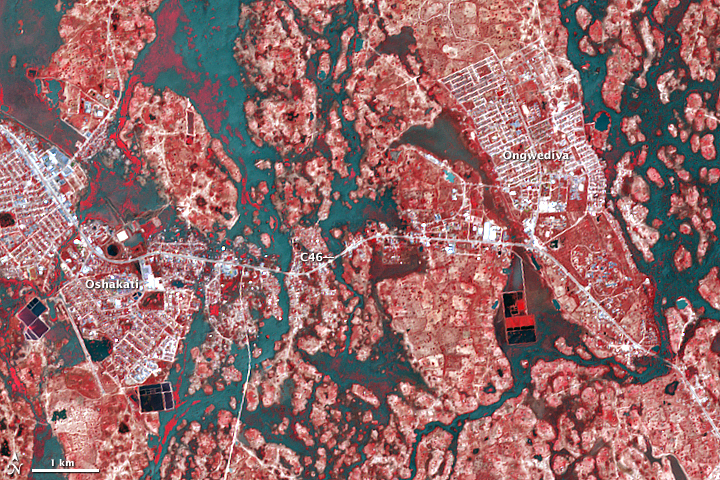 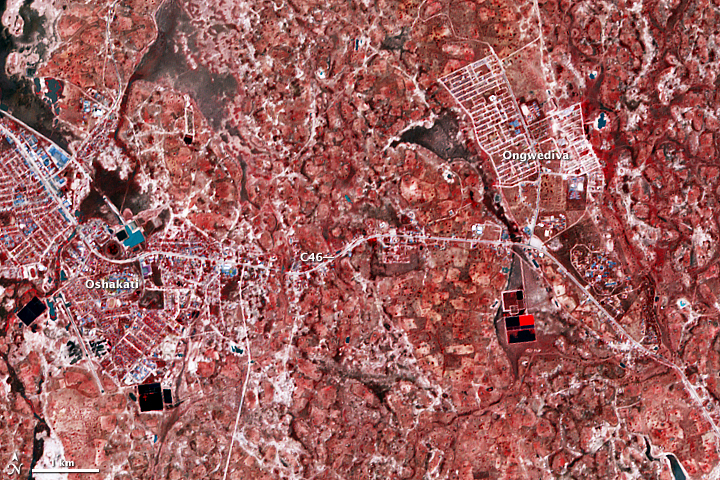 Oshakati, the capital of Oshana Region in north-central Namibia, was widely flooded during the annual rainy season that takes places each year in southern Africa. The city sits in a flat area of meandering, ephemeral stream channels and salt pans that fill with water when Namibia’s northern neighbor, Angola, experiences heavy rains.

This pair of images from the Advanced Spaceborne Thermal Emission and Reflection Radiometer (ASTER) on NASA’ Terra satellite shows the city in its flooded state on March 28, 2009 (top), compared to normal conditions on April 29, 2000. The images combine infrared and visible light, a technique that makes water (dark blue or blue-green) stand out distinctly from vegetation (red) and bare or developed areas (beige and white). Water that is deep and clear is dark blue, while muddy or shallow water is blue-green. Flood waters fill low spots and channels throughout the city on March 28. A section of the major highway in the area, C-46, is underwater southeast of Ongwediva.

Oshakati is Namibia’s second-largest city, with a population of around 42,000 people. Since the beginning of 2009, the region has been experiencing torrential rains and repeated floods. According to the United Nations Office for the Coordination of Humanitarian Affairs (OCHA), the repeated episodes of flooding have made it difficult for Namibians to repair the damages to bridges, roads, buildings, and houses. Combined with crop damages, the devastation set the stage for food shortages and suffering in coming months. In response, the President declared a state of emergency and appealed for international aid to provide food, sanitation, clean water, and temporary shelter for people displaced by floods.