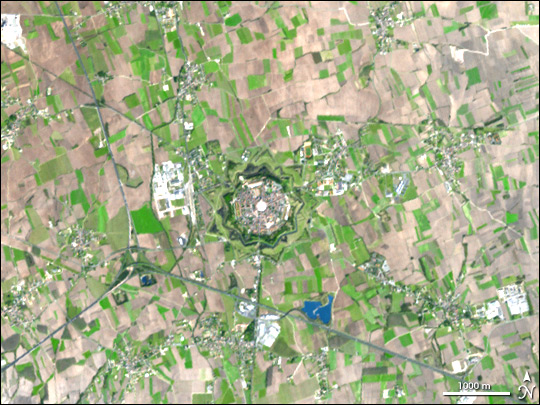 On October 7, 1593, the superintendent of the Republic of Venice founded a revolutionary new kind of settlement: Palmanova. The city’s founding date commemorated the victory of European forces (supplied primarily by the Venetian republic) over Ottoman Turks in the Battle of Lepanto. October 7 also celebrated Saint Justina, chosen as the city’s patron saint. Using all the latest military innovations of the 16th century, this tiny town was a fortress in the shape of a nine-pointed star. In between the points of the star, ramparts protruded so that the points could defend each other. A moat surrounded the town, and three big, guarded gates allowed entry.

The Advanced Spaceborne Thermal Emission and Reflection Radiometer (ASTER) flying onboard NASA’s Terra satellite captured this image of Palmanova on March 18, 2004. In this image, the town’s star shape distinguishes it from the nearby farmland. Vegetation appears in green, bare ground appears tan, buildings and pavement—including the center of the town—appear in white, and water appears blue.

Palmanova’s planners felt the need for a strong fortress against the Republic of Venice’s enemies, including the still-threatening Turks. Although the town was founded in 1593, its construction took about a century to complete. Once finished, it was regarded as perhaps the best-protected fortress in Europe. Yet Palmanova was a fortress that never saw a battle. In 1797, Napoleon captured the city without a fight.