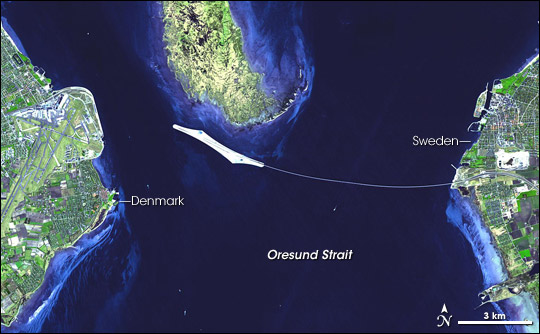 In 1991, the governments of Denmark and Sweden agreed to build a bridge to connect the two countries across the Oresund Strait. The 16-kilometer-long Oresund Link between Malmo, Sweden (right), and Copenhagen, Denmark (left), was completed and opened to traffic in 2000. Denmark and Sweden were linked once more —7,000 years after rising sea levels accompanying the end of the Ice Age severed the dry-land connection between the two.

The Oresund Link has three main segments. On the Denmark side, the link begins with a 3,510-meter (2.2-mile) underwater tunnel. The tunnel emerges from the water onto a roadway on a 4,055-meter (2.5-mile) artificial island, Peberholm, which appears as a bright white shape to the south of the natural island in the scene. The cable-supported Oresund Bridge stretches 7,845 meters (4.9 miles) across the eastern part of the Strait toward Sweden, making a thin white line across the image.

This image of the Oresund Link was acquired April 10, 2004. The large image is centered near 55.6 degrees North latitude, 12.7 degrees East longitude, and it covers an area of 50.8 by 25.9 kilometers. Deep water appears dark blue, shallow water appears bright blue, vegetation appears green, and developed or paved areas appear white. Several white specks in the waters of the Strait are boats or ships.