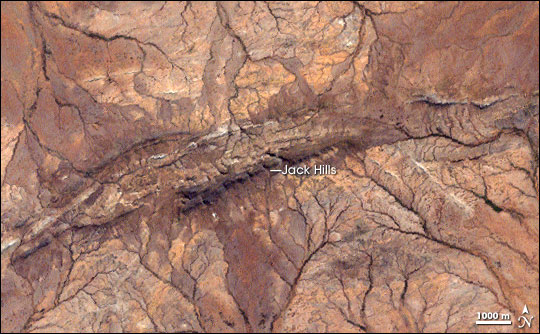 Western Australia’s Jack Hills appear as little more than a charcoal-tinged ridgeline in this image captured by the Landsat satellite July 27, 1999. The roughly 80-kilometer-long formation is a collection of bits and pieces of greatly eroded sedimentary and metamorphic rocks such as chert, sandstone, and quartzite. Numerous dry streambeds run in a spider web of cracks among the reddish rocks and sparse vegetation of the landscape.

Although the formation doesn’t have the grandeur of the Himalaya, important scientific information has come out of geological studies of the Jack Hills. Tiny crystals of a mineral called zircon have been found there, and these crystals are the oldest pieces of Earth material ever found. At about 4.4 billion years old, the crystals are even older than the rocks of the Jack Hills. The crystals, which formed only a few hundred million years after the birth of the Earth itself, are so durable that they have been recycled through countless generations of rock.

In recent years, scientists have been probing these tiny crystals for chemical clues that reveal conditions on the very early Earth. The most startling results of these analyses are that the zircons most likely formed in the presence of abundant liquid water. This surprising find indicates that the early Earth was cooler and wetter than theories—not to mention the asteroid-crater evidence on the Moon—suggest. The crystals indicate that oceans, and by extension life, could have existed on Earth far earlier than scientists once thought. To learn more about the Jack Hills zircons and what they tell us about the early Earth, please read Ancient Crystals Suggest Earlier Ocean.

Image by Robert Simmon, based on data from the University of Maryland’s Global Land Cover Facility.