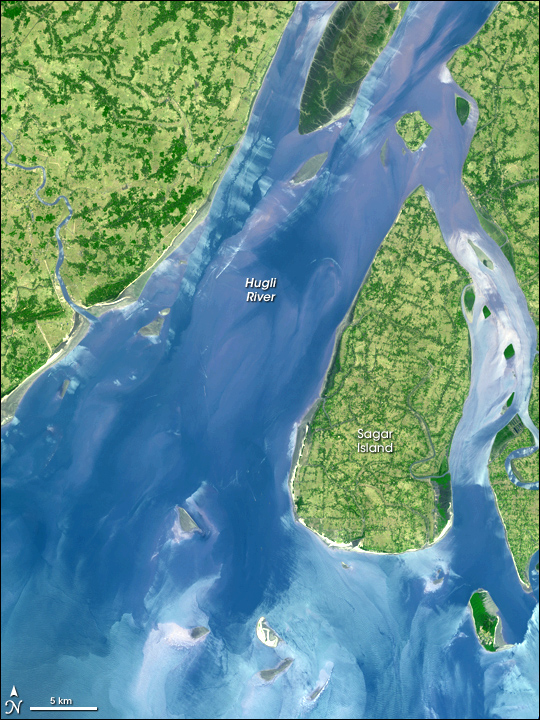 India’s Hugli River (sometimes spelled “Hooghly”) is a Ganges River distributary, one of the many branches of the river that are collectively known as the “Mouths of the Ganges.” As the Ganges approaches the coastal plain, the river fans out over the flat terrain of Bangladesh and West Bengal, India, as numerous meandering channels. The Hugli branches off the Ganges about 200 kilometers north of Calcutta, and the river flows past the city before emptying into the Bay of Bengal.

The different shades of blue in the river mouth may be from different amounts of sediment (clearer water would be darker blue) or different water depths (deeper water would be darker blue). The scattered pockets of dense vegetation, for example, along the southeast coast of Sagar Island and covering many of the smaller islands, may be remnants of the region’s mangrove forests that people have not cleared for settlement or agriculture. About 60 kilometers east of the Hugli River delta, the Sundarbans National Park begins; the park protects the largest remaining tract of mangrove forest in the world and provides critical habitat for the largest population of the planet’s last remaining Bengal tigers.