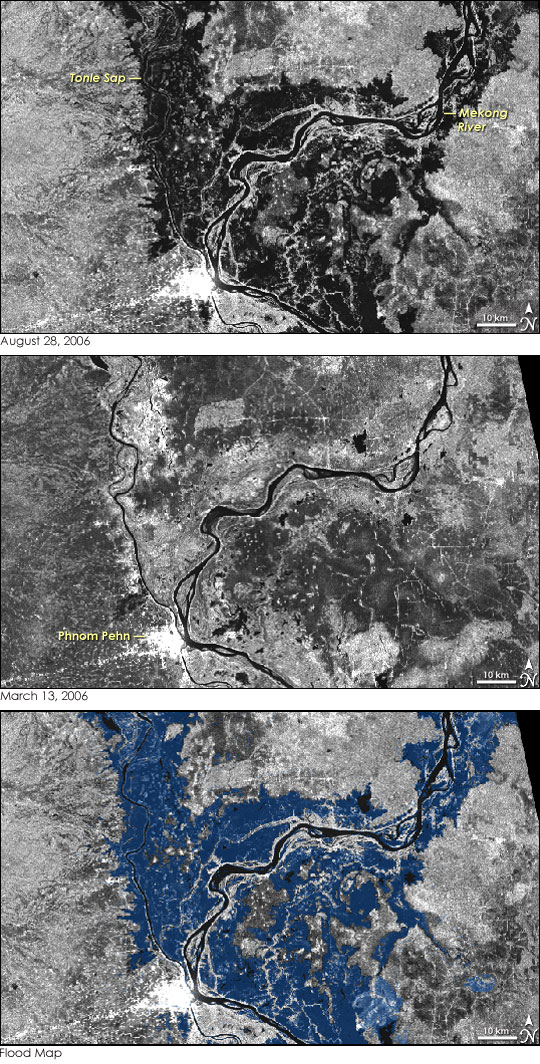 August is often a critical time for the annual build-up of monsoon floods in Southeast Asia. In 2006, heavy August rainfall in parts of Laos, Cambodia, Thailand, and Vietnam sharply increased the water levels of the Mekong River and its tributaries, giving rise to the beginning of the floods that annually fill the vast floodplains of the lower Mekong basin.

These RADARSAT-1 satellite images show the flood in progress. The top image shows the floodplains of the lower Mekong basin near Cambodia’s capital, Phnom Penh, and surrounding upland areas on August 28, 2006. (The large images show most of the lower Mekong basin.) The black-and-white image clearly reveals the flooded areas, which are very dark. When a radar sends a pulse of energy toward the Earth’s surface, the beam can be absorbed or reflected like a mirror (“backscattered”) to the sensor, depending on the type of surface below. Water absorbs most of the radar energy, so it appears dark in the images; other land cover types backscatter the radar signal, and these surfaces appear brighter. Drier, upland areas surrounding the floodplain appear in shades of gray, while the brightest point of all is the developed area of Phnom Penh, near the lower left edge of the image.

The middle image, by contrast, shows the same region on March 13, 2006, during the dry season. In this image, the river is little more than a thin black line surrounded by dry land. Note that neither image contains clouds because radar, unlike visible light, passes through clouds. The ability to “see through” clouds and to produce images with high levels of contrast between land and water makes spaceborne imaging radar especially useful in monitoring floods.

The lower image shows a flood map in which areas that were flooded on August 28, but dry on March 13 are blue. On August 28, the peak of the upstream August rainfall event had already occurred, and river gauges deployed at various points along the course of the Mekong recorded the increase in water levels as a result of the runoff. At that time, the gauges at Chau Doc and Tan Chau at the border between Cambodia and Vietnam indicated that water levels exceeded the 3-meter warning level by about 50 centimeters, but had not reached the flood level of 4.2 meters. (The latest flood information is found in the bulletin of the Mekong River Commission.) The actual water level on August 28 remained well within the bounds of the wide range of water levels that have occurred in the past during very dry or extreme flood years, such as 2000. RADARSAT-1, which is operated by the Canadian Space Agency in cooperation with MDA Corporation, planned to monitor the flood situation along the lower Mekong during the month of September, when the monsoon floods reach their peak.

Over the past decade, satellite sensors such as NASA’s Landsat Thematic Mapper, the Moderate Resolution Imaging Spectroradiometer (MODIS) on NASA’s Terra and Aqua satellites, and RADARSAT-1 have become important tools for monitoring the monsoon floods in Southeast Asia. (See Mekong From Space to learn more.) The Canadian RADARSAT-1 satellite is playing a particularly important role because of its ability to see through clouds associated with the monsoon rains. Since 1999, RADARSAT has been the mainstay for organizations like the Mekong River Commission, which uses the images to map the extent of the annual floods, adding to the information from river gauges and flood models. 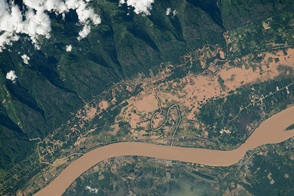 Monsoon rains drowned the landscape in Laos and Thailand.