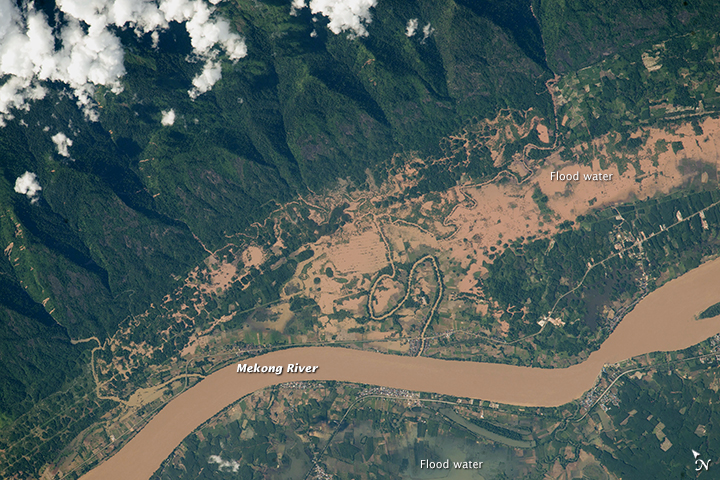 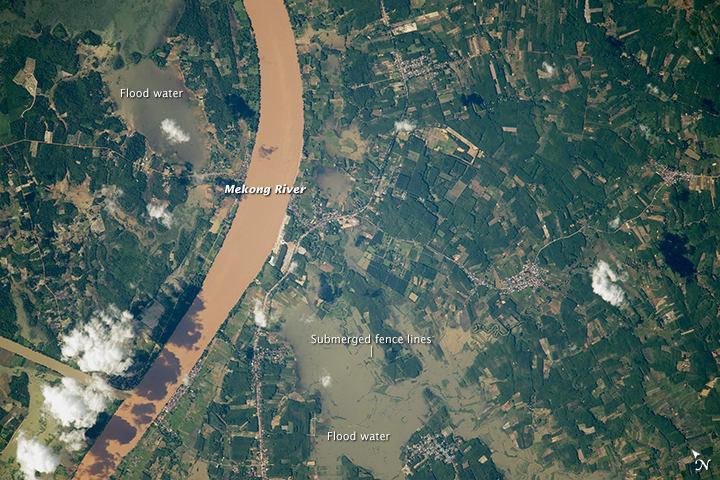 An astronaut aboard the International Space Station (ISS) took these photographs of the Mekong River along the border between Thailand and Laos, in an area about 60 kilometers (40 miles) northeast of Vientiane. Southeast Asia’s largest river winds as a red-brown channel of flood water, the result of very heavy monsoon rainfall that affected populations from North Vietnam through Thailand and Myanmar to India. ISS crews have been specially tasked to document floods photographically; these photos represent one type of imagery that NASA can collect to assist relief authorities on the ground.

Both images show thousands of acres of flooded farmland on the Mekong floodplain, in zones far wider than the “bankfull” river itself. Red-brown water on the farmland seems to have come mainly from runoff from the hills, as the Mekong does not appear to have burst its banks (at least in photos collected from the ISS). Clearer flood water in the second image is likely rainwater that has ponded in the immediate area and has not collected sediment to redden it. The rectangular grid of fences sticks up above the level of the flood water in some places.

Astronaut photographs ISS044-E-44347 and ISS044-E-44327 were acquired on August 8, 2015, with a Nikon D4 digital camera using a 1150 millimeter lens, and is provided by the ISS Crew Earth Observations Facility and the Earth Science and Remote Sensing Unit, Johnson Space Center. The images were taken by a member of the Expedition 44 crew. The images have been cropped and enhanced to improve contrast, and lens artifacts have been removed. The International Space Station Program supports the laboratory as part of the ISS National Lab to help astronauts take pictures of Earth that will be of the greatest value to scientists and the public, and to make those images freely available on the Internet. Additional images taken by astronauts and cosmonauts can be viewed at the NASA/JSC Gateway to Astronaut Photography of Earth. Caption by M. Justin Wilkinson, Texas State University, Jacobs Contract at NASA-JSC.

Monsoon rains drowned the landscape in Laos and Thailand.