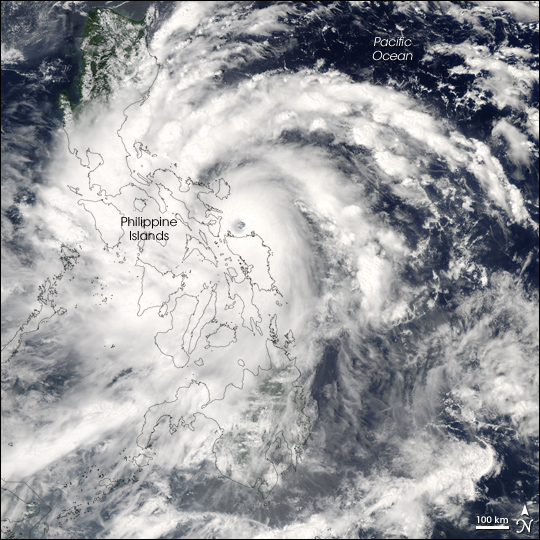 Typhoon Xangsane formed on September 25, 2006, in the western Pacific near the coast of the Philippine Islands. Over the next 36 hours, it grew from a tropical depression (area of low air pressure) to a typhoon. As of September 27, it was right on the eastern edge of the Philippines, with the eye of the storm sitting just offshore. Winds had reached 210 kilometers per hour (130 miles per hour) near the core of the storm, according to the University of Hawaii’s Tropical Storm Information Center.

This photo-like image was acquired by the Moderate Resolution Imaging Spectroradiometer (MODIS) on the Terra satellite on September 27, 2006, at 1:00 p.m. local time (05:00 UTC). Xangsane at the time of this image was a well-defined, spiraling swirl of clouds, with a distinct, but cloud-filled (“closed”) eye. The arm structure was not tightly wound, a trait of a moderately young storm.

According to news reports, the Philippine Coast Guard had suspended ferry traffic at ports across the region due to strong winds and high waves, leaving thousands of passengers temporarily stranded. Heavy rains triggered flash flooding that had trapped perhaps 100 families in their homes in the central Philippines. Storm track projections on September 27 suggested that the typhoon would lose power as it crossed the islands and rebuild only slightly as it continued west across the South China Sea. The storm was predicted to come ashore on the Asian mainland in central Vietnam on or around October 2.

You can also download a 250 m resolution Typhoon Xangsane KMZ file (6.4 MB) for use with Google Earth.

Typhoon Xangsane began as an area of low air pressure (tropical depression) on September 25, 2006, in the western Pacific near the coast of the Philippine Islands. Over the next 36 hours, it grew into a typhoon.