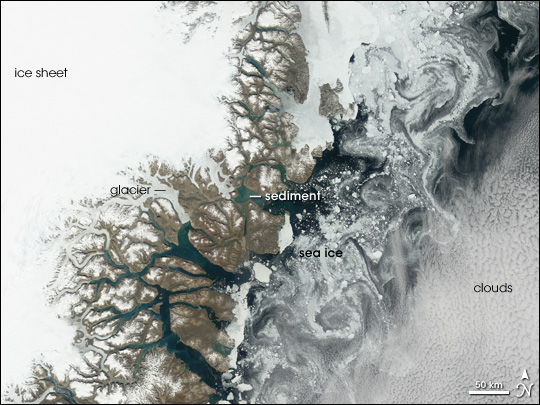 Along the northeastern coast of Greenland, glaciers and ocean currents sometimes produce an eye-catching display of shapes and colors. On July 25, 2006, the Moderate Resolution Imaging Spectroradiometer (MODIS) flying onboard NASA’s Terra satellite caught such a display.

Greenland’s coast is riddled with fjords—glacier-carved canyons flooded by seawater. In several of the fjords, the water appears pale turquoise, in contrast to the dark blue of the ocean water. This lighter shade results from fine sediment. The sediment particles are small enough to remain suspended in water, lightening its color.

East of the network of fjords, pale blue sea ice swirls along Greenland’s coast in a paisley pattern. These intricate shapes in the sea ice result from ocean currents moving in opposite directions. Immediately east of the coast is a southward current. East of that, a different ocean current heads north. The currents brushing past each other constantly push the sea ice in different directions.

Along the northeastern coast of Greenland, glaciers and ocean currents sometimes produce an eye-catching display of shapes and colors.