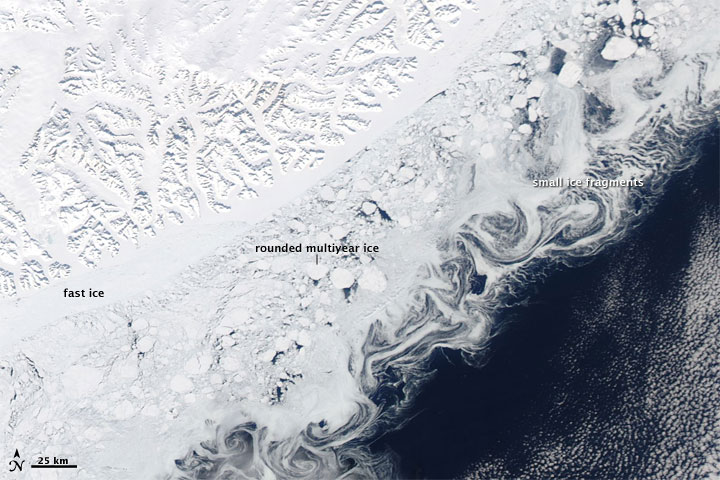 Various types of sea ice congregated along the east coast of Greenland in late March 2010. The Moderate Resolution Imaging Spectroradiometer (MODIS) on NASA’s Aqua satellite captured this relatively cloud-free natural-color image on March 27, 2010. In the upper left quadrant of the image is the Greenland coast. Open ocean predominates in the lower right quadrant.

Closest to land, land-fast sea ice clings to the shore, impervious to ocean currents. This ice is often held in place by shallow ocean bottoms or continental shelves. Farther away from land, however, the situation changes as ocean currents play a greater role in moving and shaping ice.

The East Greenland Current flows southward from the Arctic along the island’s eastern coast, carrying sea ice with it. Ice carried by this current occurs in large, thick pieces, and the ice in this swath along the Greenland coast almost certainly originated elsewhere. The large white circular shapes in this image are pieces of multiyear ice carried to this location by the East Greenland Current. Just as the relentless movement of water in rivers and streams can smooth the jagged edges of rocks over time, ocean currents can smooth ice fragments into round shapes.

Even farther out to sea than the large fragments of multiyear ice are much smaller pieces of ice—so small that they are at the mercy of even small surface currents. Collectively these tiny ice fragments form delicate swirls of ice that resemble foam on latte.