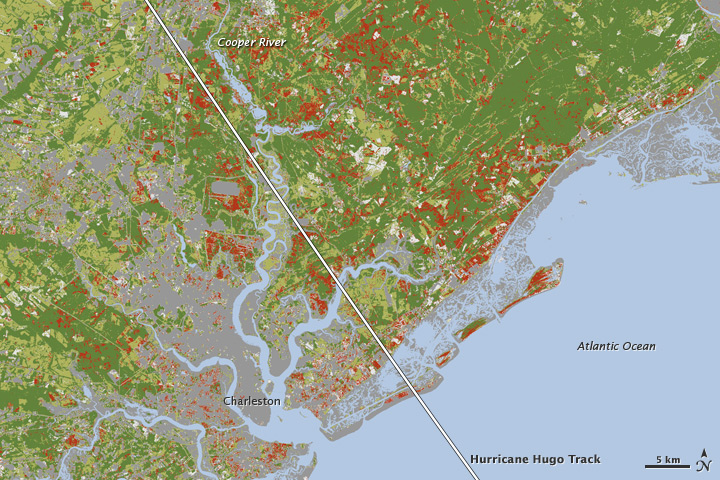 In addition to their battering of human habitats—cities and residential neighborhoods—hurricanes cut a destructive swath through migratory bird habitat. A recent study that combined field surveys of birds with before-and-after satellite images of forests concluded that migratory bird species located as far as 60 miles (100 kilometers) from a hurricane’s path had experienced population declines that persisted for up to five years.

This map shows forest disturbance following the passage of Hurricane Hugo through South Carolina in 1989, one of five areas in the southern United States that scientists investigated. By comparing images from NASA’s Landsat 5 satellite acquired before (1988) and after the hurricane, scientists identified forest areas that were not damaged by the hurricane (dark green) and areas that were (red). Light green shows forest areas that were already disturbed (for example, from logging or fire) prior to Hurricane Hugo’s passing. Gray areas are non-forest land, including urban areas and beaches.

Most of the damage occurred to the right of the hurricane track. This unevenness in damage is because the storm’s winds in that area are aligning with the forward motion of the storm (generally northwest), which enhances the wind speeds. Much of the forest area north of Hugo’s track is part of Francis Marion National Forest. According to the Charleston, South Carolina, office of the National Weather Service, “Logging operations in the Francis Marion National Forest were permanently ended due to the storm felling more than 1 billion board-feet of lumber (approximately 70% of lumber-quality trees).”

Although overall bird populations declined in hurricane damaged areas, some types of birds suffered more than others. Not surprisingly, groups of birds that nest in the canopy of trees declined significantly, while species that nest in cavities or near the ground were affected far less.

For more on the impacts of extreme weather, including hurricanes and severe drought, on birds, please see the NASA feature story, When Extreme Weather Strikes, Migratory Birds Suffer More than Expected.

NASA image by Robert Simmon, based on data from Chad Rittenhouse, Department of Forest and Wildlife Ecology, University of Wisconsin-Madison. Caption by Rebecca Lindsey.