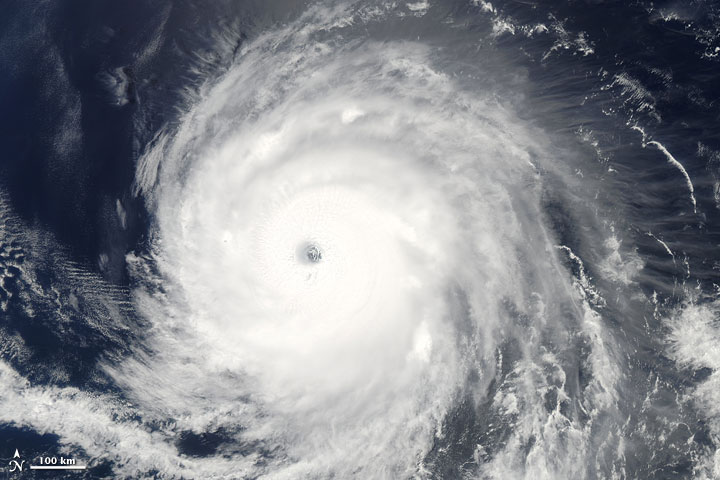 Perfectly circular, powerful Hurricane Celia spans hundreds of kilometers over the Pacific Ocean in this image from June 24, 2010. Rough-textured clouds surround the storm’s distinct eye, which has a diameter of roughly 25 kilometers. Farther from the center of the storm, spiral arms appear thinner and smoother.

Celia continued to strengthen after this image was acquired. At 8:00 p.m. Pacific Daylight Time on June 24, 2010, the National Hurricane Center reported that Celia had strengthened to a Category 5 hurricane. By 8:00 a.m. the following morning, Celia had weakened to a Category 4 storm, but it still had maximum sustained winds of 240 kilometers (150 miles) per hour, said the National Hurricane Center.

On the morning of June 25, Celia was roughly 1,330 kilometers (825 miles) southwest of the southern tip of Baja California. The National Hurricane Center anticipated that Celia would continue to weaken as it tracked north and west across the Pacific Ocean. The storm was not forecast to come ashore over land.

Celia strengthened to a Category 2 hurricane over the eastern Pacific Ocean in late June 2010.