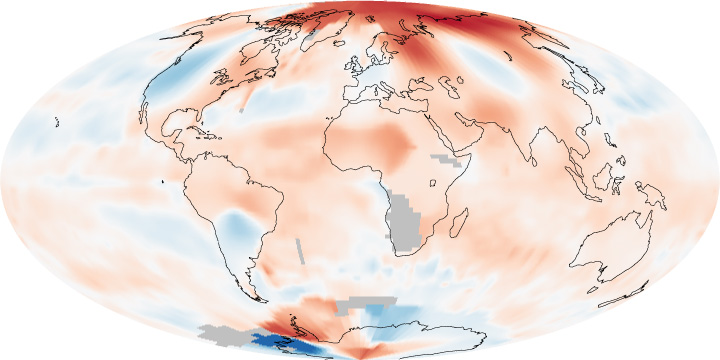 In May 2010, temperature records assembled by the NASA Goddard Institute for Space Studies (GISS) showed wide expanses of slightly above- and slightly below-normal temperatures over most of the globe, but also dramatic warmth near the North Pole. Cooler-than-normal conditions occurred in parts of western North America, southern South America, Western Europe, and Central Asia. Unusually low temperatures also affected parts of Antarctica, especially west of the Antarctic Peninsula. Over much of the globe, however, high temperatures predominated.

Especially warm temperatures—close to five degrees Celsius (9 degrees Fahrenheit) above average—occur over most of the Arctic, including the northernmost reaches of North America, northwestern Greenland, and most of the northern coast of Eurasia. Unusually warm conditions also extend southward into Eastern Europe and Siberia. In Antarctica, warm conditions appear in some inland areas and especially over the Antarctic Peninsula.

“Ongoing temperature anomalies like these are strong evidence of the Arctic amplification of global climate change,” says Ted Scambos, lead scientist at the National Snow and Ice Data Center. The Arctic environment is very vulnerable to warming because of feedbacks that amplify the initial change. Sea ice retreat and snow melt reduce Earth’s albedo, which can lead to increased warmth and further melting. Scambos explains that, although the Northern Hemisphere experienced significant snowfall in early 2010, spring melt was rapid, exposing land surfaces to sunlight sooner than usual.

“Where a lot of the big economies are—the United States, Western Europe, Japan—it’s been cool, but the world as a whole is quite warm,” Scambos observes. “The Sahel, the Indus Valley, and China didn’t see a cool spring the way other areas did.”

This color-coded map shows global temperatures for May 2010. Although cool conditions prevailed in some heavily populated areas, warm conditions predominated, especially near the poles.