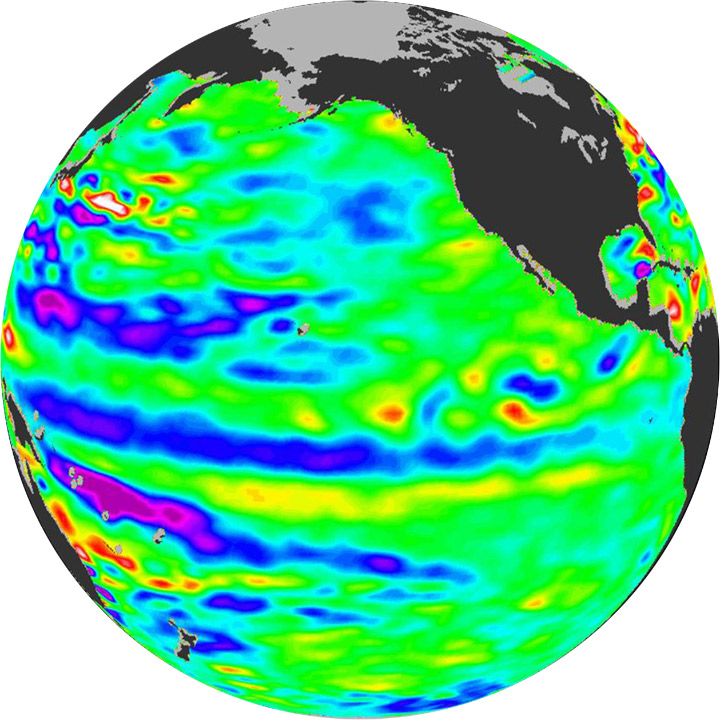 The latest image of Pacific Ocean sea surface heights from the NASA/European Ocean Surface Topography Mission/Jason-2 oceanography satellite, captured on June 11, 2010, shows that the tropical Pacific has switched from warm (red) to cold (blue) during the last few months, perhaps foreshadowing a transition from El Niño, to La Niña conditions.

The blue area in the center of the image depicts the recent appearance of cold water hugging the equator, which the satellite measures as a region of lower-than-normal sea level. (Water contracts slightly when it cools and expands when it warms.) Remnants of the El Niño warm water pool, shown here in red and yellow, still linger in pockets to the north and south of the equator in the center of the image.

“The central equatorial Pacific Ocean could stay colder than normal into summer and beyond. That’s because sea level is already about 10 centimeters (4 inches) below normal, creating a significant deficit of the heat stored in the upper ocean,” said NASA/JPL oceanographer and climatologist Bill Patzert. “The next few months will reveal if the current cooling trend will eventually evolve into a long-lasting La Niña situation.”

A La Niña is essentially the opposite of an El Niño. During a La Niña, easterly trade winds in the western equatorial Pacific are stronger than normal, and the cold water that is normally located only along the coast of South America extends all the way to the central equatorial Pacific. La Niñas change global weather patterns; they are associated with less moisture in the air, resulting in less rain along the coasts of North and South America. They also tend to increase the formation of tropical storms in the Atlantic.

“For the American Southwest, La Niñas usually bring a dry winter, not good news for a region that has experienced normal rain and snowpack only once in the past five winters,” said Patzert.