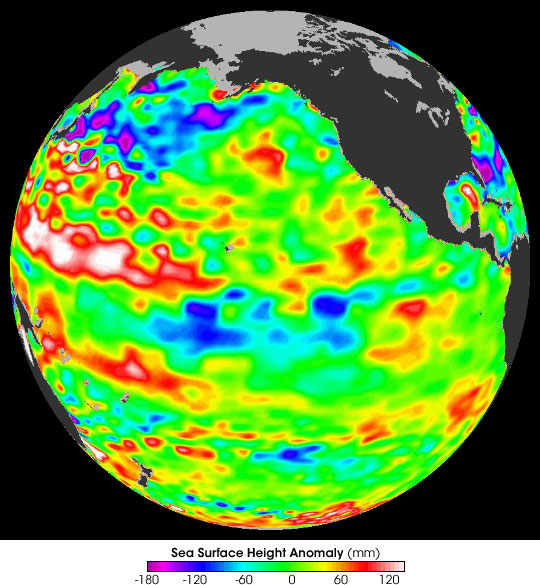 As water warms, it expands. As it cools, it contracts. Because of this correlation between temperature and water-column height, the height of the sea surface tells scientists about the ocean’s temperature. La Niña is a cooling of the equatorial waters in the Pacific, and this phenomenon affects weather over much of that ocean. As 2005 drew to a close, sea-surface height changes in the tropical Pacific exhibited characteristics of a developing La Niña.

La Niña is essentially the opposite of El Niño. During La Niña, the trade winds—easterly winds that blow through the tropics and subtropics—are stronger than normal. Likewise, the cold water that normally exists along the coast of South America extends to the central equatorial Pacific. La Niña reappears every three to five years. At the beginning of 2006, scientists were still unsure whether this cold pool would evolve into a long-lasting, strong La Niña condition. If so, it could be expected to reorganize global weather patterns.