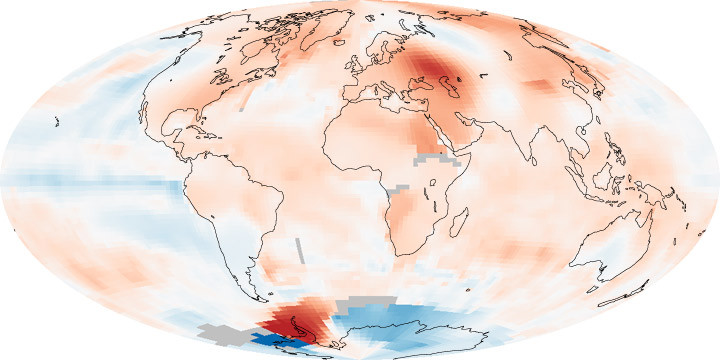 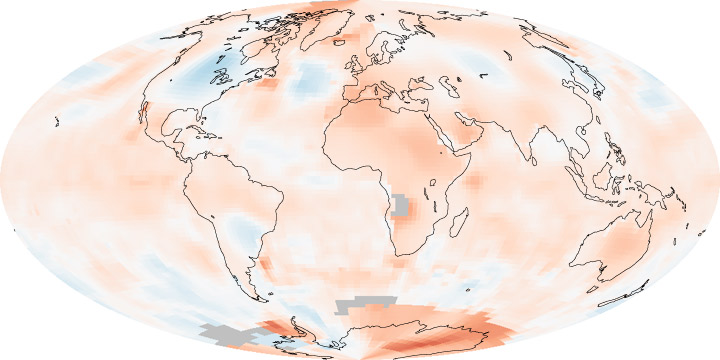 But from a global perspective, how warm was it? And was global warming the cause of the unusual heat waves? Scientists at NASA’s Goddard Institute for Space Studies (GISS), led by James Hansen, released an analysis that addressed these questions.

The global maps above show temperature anomalies; that is, how temperatures in June through August 2010 (top image) and 2009 (bottom) differed from the mean temperatures from 1951-1980. Shades of red represent warmer than normal temperatures, with blues depicting cooler. (Click here to learn more about the GISS temperature models.)

Globally, 2010 was the 4th warmest summer in GISS’s 131-year-temperature record. The summer of 2009 was the 2nd warmest. The slightly cooler 2010 temperatures were primarily the result of a moderate La Niña replacing a moderate El Niño in the Pacific Ocean. Note in 2010 that much of the eastern Pacific, the west coasts of North and South America, and much of Antarctica were cooler than the long-term mean. Temperatures were extremely warm in western Russia and the Antarctic Peninsula.

“Unfortunately, it is common for the public to take their most recent local temperature anomaly as indicative of long-term climate trends, ” Hansen noted. “People need to understand that the temperature anomaly in one place in one season has limited relevance to global trends. ”

The intensity of the Russian heat wave exceeded anything scientists have seen in the temperature record since widespread global temperature measurements became available in the 1880s. But can global warming cause such extreme weather events? The answer—both no and yes—is not simple. Weather within a given region occurs in such a complex and unstable environment, driven by such a multitude of factors that no single weather event can be pinned solely on climate change.

However, if you frame the question differently—Would an event like the Moscow heat wave have occurred if carbon dioxide levels had remained at pre-industrial levels? —the answer, Hansen asserted, is clear. “Almost certainly not. ”

The frequency of extreme weather events increases disproportionately as global temperatures rise. “Were global temperature not increasing, ” he said, “the chance of an extreme heat wave such as the one Moscow experienced, though not impossible, would be vanishingly small. ”

Will 2010 shape up to be the warmest on record? During the warmest year on GISS’s record—2005—temperatures were especially high during the last four calendar months, and it’s obviously not clear yet how the rest of 2010 will stack up. “What is clear, ” said Hansen, “is that the warmest 12-month period in the GISS analysis was reached in mid-2010. ”

NASA images by Robert Simmon, based on data from the Goddard Institute for Space Studies. Caption by Adam Voiland and Mike Carlowicz.