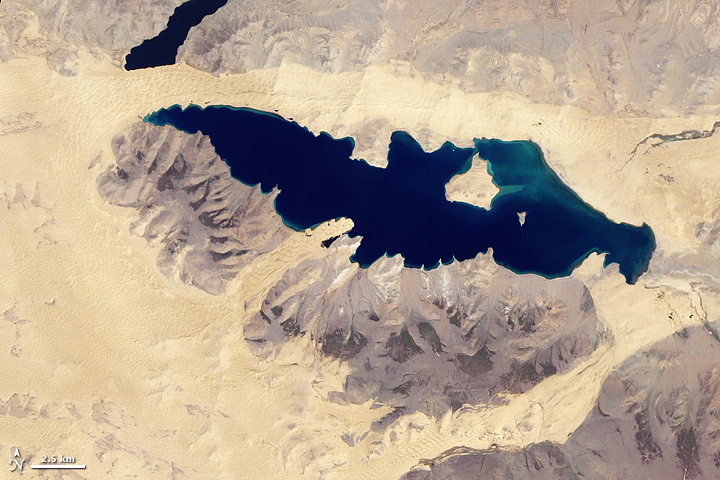 In western Mongolia, braided streams of sand dunes stretch east-west across the arid landscape. One ribbon of sand, spanning roughly 200 kilometers, extends from an area south of Khyargas Lake in the west to a smaller lake, Telmen Nuur, in the east. In between, sand dunes march past Har Nuur, or “Black Lake.”

The Advanced Land Imager (ALI) on NASA’s Earth Observing-1 (EO-1) satellite captured this natural-color image of Har Nuur on June 12, 2010. Camel-colored sand dunes ripple along the lake’s northern shore. Along the southern shore, sand dunes approach the lake in just two locations. A triangle-shaped expanse of sand borders Har Nuur in the east, and a tongue of sand intrudes into the lake in the west, pushing through a gap in the nearby mountains. All of the sand dunes, however, form part of a larger dune field nearly encircling the lake.

Har Nuur sits in the Valley of Lakes of western Mongolia. Bordered by multiple mountain ranges, the Valley of Lakes hosts remnant basins of larger ancient lakes, dune fields, and salt marshes. Har Nuur, like other lakes in the region, is a closed-basin lake fed by precipitation.

Hot, dry summers prevail in this part of the word, with frequent, hot winds blowing from the northwest. Winds push the sand dunes eastward past Har Nuur and the nearby mountains. The long, skinny dune field pushing into the lake is a persistent feature. It was equally obvious when astronauts on the International Space Station photographed Har Nuur in 2006. 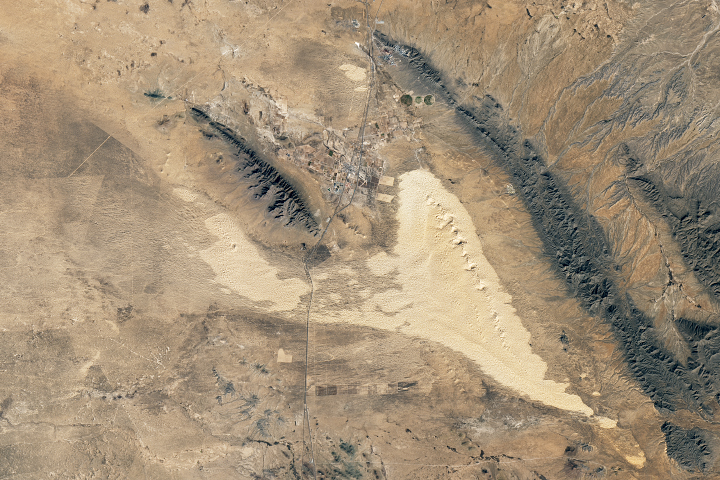