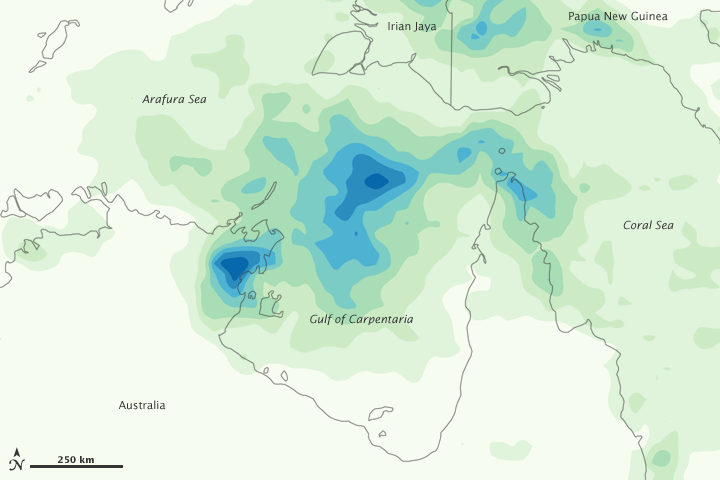 Roads flooded and schools were converted to shelters in Australia’s Northern Territory in late March 2010 as Tropical Cyclone Paul dumped rain along the coast, according to NTNews.com.au. The storm hovered between northern Australia and southern New Guinea, covering the Gulf of Carpentaria and much of the Arafura Sea.

This color-coded image shows estimated rainfall amounts from March 22–28, 2010. Lowest amounts (less than 75 millimeters) appear in pale green, and heaviest amounts (more than 600 millimeters) appear in dark blue. The heaviest amounts are concentrated over the Gulf of Carpentaria and along the eastern coast of Arnhem Land. Relatively heavy rain also occurs at the northernmost tip of the Cape York Peninsula, and over New Guinea.

According to NTNews, parts of Australia’s Northern Territory had experienced more than 40 hours of nonstop rain. As of March 29, 2010, the U.S. Navy’s Joint Typhoon Warning Center forecast that the storm would maintain its current intensity for several hours before slowly dissipating.