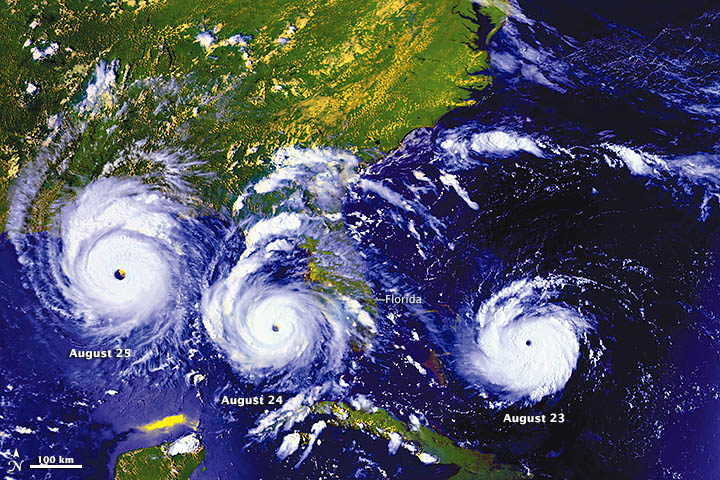 Hurricane Andrew was not the deadliest tropical cyclone to strike the U.S. mainland, but the compact, fast-moving storm remains one of the strongest and costliest on record. The Category 5 storm slammed into southern Florida two decades ago on August 24, 1992.

The first signs of the storm emerged off the west coast of Africa on August 16 in the midst of an otherwise quiet hurricane season. A tropical depression formed and moved westward, drifting midway between Bermuda and Puerto Rico by August 21. Initially, forecasters did not expect the lingering depression would amount to much. But on August 22, the system encountered favorable environmental conditions—particularly reduced vertical wind shear—that caused rapid strengthening, transforming it into a hurricane.

The image above is a compilation of data acquired by the GOES-7 satellite that shows Andrew’s progression over the course of three days.

On August 23, the storm was moving through the Atlantic Ocean, over the Bahamas, and on a course for southern Florida. On August 24, it roared into Dade County and the city of Homestead (south of Miami). With a minimum pressure of 922 millibars, Andrew’s winds were so intense that they destroyed all the instruments capable of measuring wind speeds at weather stations. Before failing, an instrument at Fowey Rocks detected gusts as high as 169 miles per hour (280 kilometers per hour); an instrument at a private residence clocked winds blowing as fast as 177 mph (285 km).

After making landfall, Andrew tracked west across the Florida peninsula and entered the Gulf of Mexico. By August 25, the storm shifted gradually northward and headed for the central Louisiana coast, which it struck on August 26 as a Category 3 hurricane.

While storm surges often cause the bulk of damage during hurricanes, in Andrew’s case, high wind speeds proved most destructive. Whole neighborhoods were flattened and thousands of homes lost their roofs; more than 90 percent of mobile homes in affected areas were destroyed. The damage was so severe that it ignited calls for more rigorous construction practices and better enforcement of building codes.

In all, Andrew caused about $26.5 billion in damages, making it the second costliest hurricane on record (when adjusted for inflation). Only Hurricane Katrina caused more damage. And only three storms—Katrina in 2005, Camille in 1969 and an unnamed hurricane that struck the Florida Keys in 1935—were more intense, according to statistics complied by the National Hurricane Center.

Forecasting capabilities have improved significantly since Andrew. In 1992, hurricane forecasts were issued just three days in advance; now they come more than five days ahead of time. And they are more accurate. One-day hurricane track errors have been cut in half since Andrew, the Miami Herald reported.

The improvement comes largely from having more data and from forecasting models driven by more powerful computers. In 1992, meteorologists based forecasts primarily on information from a single satellite and aircraft that flew through storms at 10,000 feet (3,000 meters). Now, numerous satellites collect data used by forecasting models. And aircraft carry a suite of sophisticated sensors—such as GPS-enabled dropwindsondes and stepped frequency microwave radiometers—that did not exist when Hurricane Andrew came ashore. 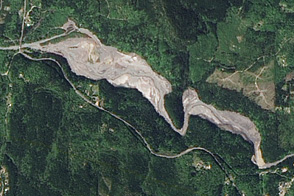