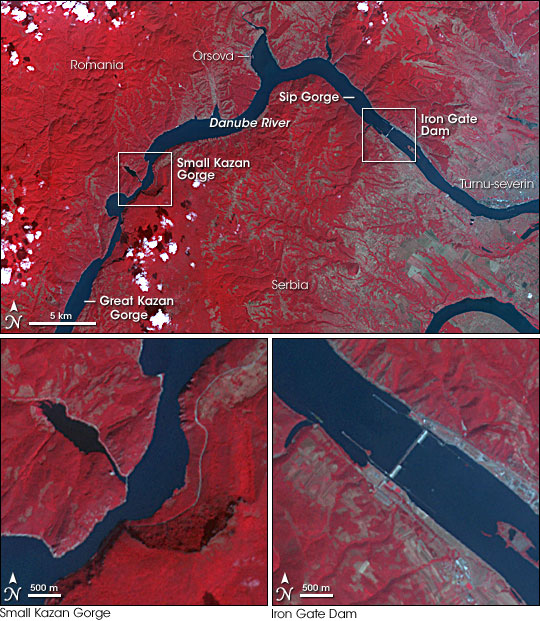 From its headwaters in Germany’s Black Forest, the Danube winds its way through ten European countries to drain into the Black Sea. For much of its course, the river moves lazily through wide valleys, but as it enters the border region between Romania and Serbia, its banks narrow into a series of high cliffs. Here, the river carved a passage through the lower Carpathian Mountains to its north and the Balkan Mountains to its south, creating a series of four steep gorges. These gorges are known as the Iron Gate. Within the last of the four gorges is the Danube’s second iron gate: the Iron Gate Dam. Both of the Danube’s Iron Gates—the lower gorges and the dam—are shown in this image, taken by the Advanced Spaceborne Thermal Emission and Reflection Radiometer (ASTER) on NASA’s Terra satellite.

Much of the image is red, where plants and trees cover the land. Tan rocky outcrops snake along mountain tops too high in altitude to support trees and emerge in the steep cliffs that line the river. Signs of human habitation are visible, too; the silver area on the north shore of the river is the Romanian town of Orsova.

The Danube cuts a wide, blue ribbon through the center of the image. The river’s narrowest point as it passes through the gorges is at Great Kazan gorge, shown on the left side of the image. Within the gorge, the Danube shrinks to 150 meters in width and is flanked by limestone cliffs that reach to about 300 meters. The cliffs are a darker shade of red on the east bank of the river and are accented with dark shadows. After exiting the gorge, the river widens again as it enters the Orsova Valley. A “u” bend brings the Danube into the last gorge, the Sip Gorge. Though the land’s wrinkled appearance suggests rugged terrain, the cliffs here are not nearly as severe as in the Kazan gorge.

The Danube is a major waterway for international trade, but the Iron Gate gorges created rapids and whirlpools that made navigation difficult. Control over this section of the Danube was gained with the construction of the Iron Gate Dam in the Sip Gorge. The dam, the white line across the river on the right side of the image, began operation in 1972. As the Danube deepened behind the dam, its expanding waters covered at least seven towns, including old Orsova and the island town of Ada Kaleh, a Turkish enclave.

Apart from Orsova and a few very small towns, which form tiny silver dots on the north shore of the river, the region is notably free of signs of human habitation west of the Iron Gate Dam. The square grids of vegetation created by agriculture are missing, as are sprawling silver cities. The land on both sides of the river is protected. Djerdap National Park lines the south shore of the river in Serbia, and Portile de Fier National Park forms the Romanian shore in the north. Both parks protect the natural environment as well as significant cultural and historical sites ranging from Neolithic settlements to a medieval fortress.