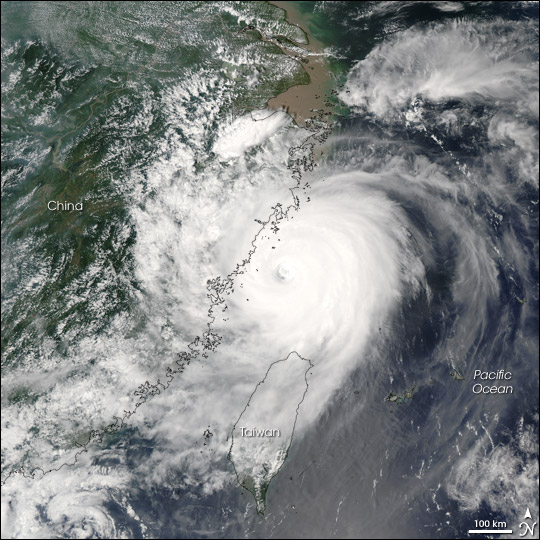 Typhoon Saomai formed in the western Pacific on August 4, 2006, as a tropical depression. Within a day, it had become organized enough to be classified as a tropical storm and earn a name: Saomai, which is the Vietnamese name for the planet Venus. The storm continued to gather strength, becoming a typhoon on August 6. As of August 10, it was poised to strike mainland China as a Category 4 super typhoon, making it the eighth storm to come ashore in China in 2006, according to the Xinhua News Agency.

This photo-like image was acquired by the Moderate Resolution Imaging Spectroradiometer (MODIS) on the Aqua satellite on August 10, 2006, at 1:05 p.m. local time (05:05 UTC). Typhoon Saomai possessed a well-defined, closed (cloud-filled) eye at the center of the storm, with tightly wound spiral arms. Thunderstorm systems particularly close to the eyewall were sending up tall cloud towers, which cast shadows onto the surrounding lower clouds (see large, full-resolution image). Around the time MODIS captured this image, Typhoon Saomai had sustained winds of around 240 kilometers per hour (150 miles per hour), according to the University of Hawaii’s Tropical Storm Information Center.