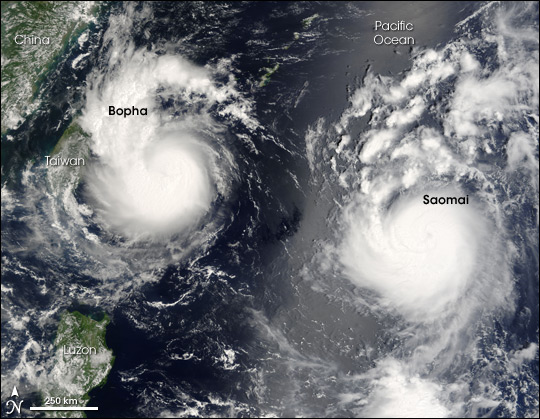 Typhoon Saomai formed in the western Pacific on August 4, 2006, as a tropical depression. Within a day, it had become organized enough to be classified as a tropical storm, and continued to grow, becoming a Category 1 typhoon a day later. Just as Saomai crossed the threshold to typhoon status, a tropical depression formed in the same general area, reaching storm status on August 7, at which point it was named Bopha. As of August 9, Bopha and Saomai were both heading roughly west, with Bopha projected to pass directly over Taiwan, while Saomai was projected to pass north of the island before making landfall on the Asian mainland.

This photo-like image was acquired by the Moderate Resolution Imaging Spectroradiometer (MODIS) on the Terra satellite on August 9, 2006, at 10:05 a.m. local time (02:05 UTC). Bopha had developed a strong cyclonic shape, and although the storm system does not have a well-developed eye, the “boiling” clouds around the center suggest thunderstorm activity.

Typhoon Saomai appears similar in size to Bopha, but it was a much more powerful storm. At the time of this image, Bopha had sustained peak winds of roughly 82 kilometers per hour (52 miles per hour), while Typhoon Saomai had sustained winds of around 140 km/hr (85 mph), according to the University of Hawaii’s Tropical Storm Information Center. Tropical Storm Maria, which was in the picture with Bopha and Saomai on August 7, had moved farther north as of August 9, when MODIS captured this image.