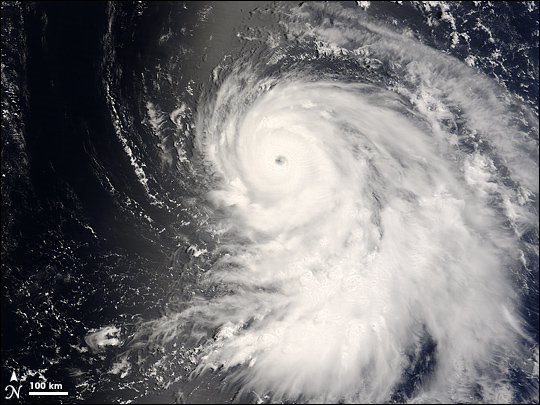 Typhoon Nakri was swirling in the western Pacific Ocean as a powerful Category 4 storm when the Moderate Resolution Imaging Spectroradiometer (MODIS) on NASA’s Terra satellite viewed it on May 29, 2008. The storm had sustained wind speeds of 230 kilometers per hour (145 miles per hour), making it a Super Typhoon, according to the University of Hawaii’s Tropical Storm Information Center.

MODIS shows the storm with a clear, but irregularly shaped eye, which is not expected to hold together, lessening the power of the storm. As of May 29, the Joint Typhoon Warning Center was projecting that the super typhoon would not maintain its strength for long. High-altitude winds were projected to pull the storm apart, and cooler sea surface temperatures were expected in its path. The typhoon was well away from most land, and forecasters were not expecting it to make landfall.