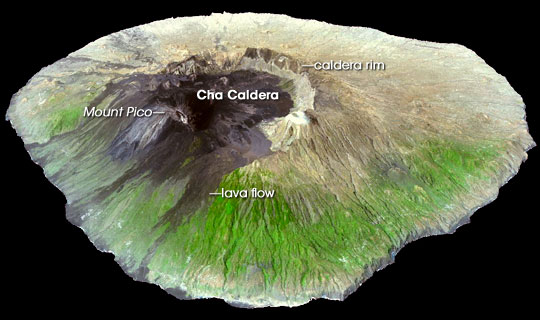 Of the four volcanoes included among the archipelago that make up the Cape Verde Republic in the Atlantic Ocean off the west coast of Africa, small Fogo Island is the tallest and most active. The entire island is nothing more than a towering stratovolcano, rising 2,829 meters (9,281 feet) and topped by an 8-kilometer caldera. In 1995, after a more than 40 years of quiet, the volcano erupted, spilling lava into the caldera, where people had settled in search of good farmland. A small village was destroyed and thousands of people were forced to evacuate, many of them permanently.

This three-dimensional image shows satellite observations of topography and surface terrain collected by the Advanced Spaceborne Thermal Emission and Reflection Radiometer (ASTER)on NASA’s Terra satellite on August 27, 2002. The image is oriented as though you were viewing the island from the northeast. The vegetation is much lusher on the north and east of the island than the south and the west. This difference in vegetation may be due to patterns in volcanism. Lava flows are typically on the eastern side of the volcano, and the volcanic soils are rich in minerals and other nutrients.

Dark lava sprawls across the caldera floor and spills down the eastern flanks of the volcano. The 1995 eruption began on April 2 and continued into May. Lava fountains and ash shot from new vents that cracked open on the flanks of Mt. Pico. According to reports provided at the time on the Volcano World Website, “On April 23, deafening explosions from the vents shook the ground with concussion waves. A new vent formed and erupted lava that flowed 2,300 feet (700 meters) to the west in only a few hours.” This lava flow into the caldera destroyed valuable farmland, a limited resource on the small, steep island.

This image is centered near 14.9 degrees North latitude, 24.4 degrees West longitude. The perspective view was created by draping image data over a DEM derived from ASTER data, and exaggerating the topographic relief by a factor of 2.