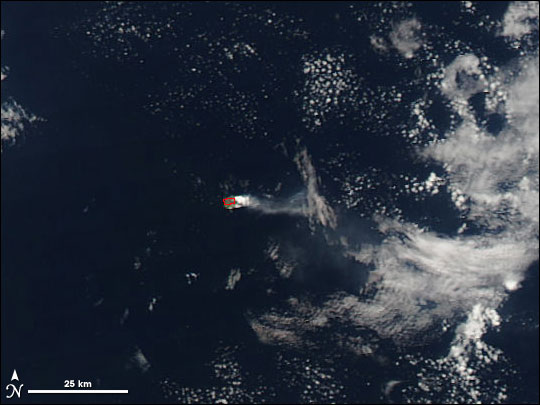 The volcano on Barren Island erupted on August 24, 2005. A part of India, Barren Island is one of the Andaman Islands, and lies over the fault whose movement caused the tsunami on December 26, 2004. It is a stratovolcano composed of lava, rock fragments, and volcanic ash. On the west side of the island is a caldera formed by an explosive eruption in the Pleistocene era. Two kilometers wide, the caldera takes up the bulk of this tiny island that measures only 3 kilometers across.

The Moderate Resolution Imaging Spectroradiometer (MODIS) flying onboard the Aqua satellite captured this image on August 24, 2005. In this image, smoke blows from the volcano eastward over the Andaman Sea toward a bank of clouds. The red outline indicates surface area hotter than its surroundings.