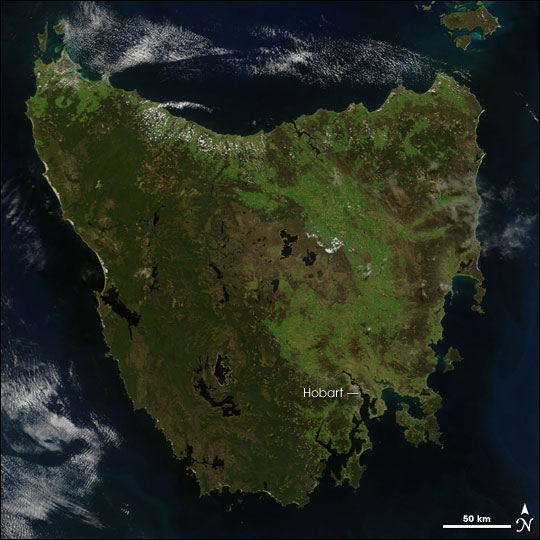 Lying about 200 kilometers (124 miles) off the southeastern coast of Australia is the island state of Tasmania. This island has been likened to pre-industrial England because of its temperate climate and lush landscapes. The British, however, used the island for an unsentimental purpose. They settled it as a penal colony in 1803. Prior to settlement by the British, the island saw visits by the Dutch, when explorer Abel Tasman named it Van Diemans Land in 1642. Human settlement of the island extends much further back in time, likely tens of thousands of years, by the Aborigines.

The Moderate Resolution Imaging Spectroradiometer (MODIS) flying onboard the Terra satellite captured this image of Tasmania on November 16, 2005. This largely cloud-free image shows the island’s geographic features. The western region is mostly mountainous and contains much of the island’s rainforest. Agricultural regions are primarily in the East. The brown patch in the center indicates the region with the highest elevation. The state capital, Hobart, is in the southeast, along the coast. Part of the much smaller Cape Barren Island appears off Tasmania’s northeast coast.

Tasmania was probably connected to Australia until 10,000 years ago, when rising sea levels at the end of the last Ice Age cut it off from the continent. Before this happened, a wide range of species managed to populate Tasmania. The relatively small island is home to a surprising number of plants and animals. Its vegetation ranges from temperature rainforests to dry coastal areas to alpine shrubs. Besides the Tasmanian devil, wildlife includes wombats, echidnas, and platypuses. More than 20 percent of Tasmania has been listed with United Nations Educational, Scientific, and Cultural Organization (UNESCO) as a World Heritage Area.