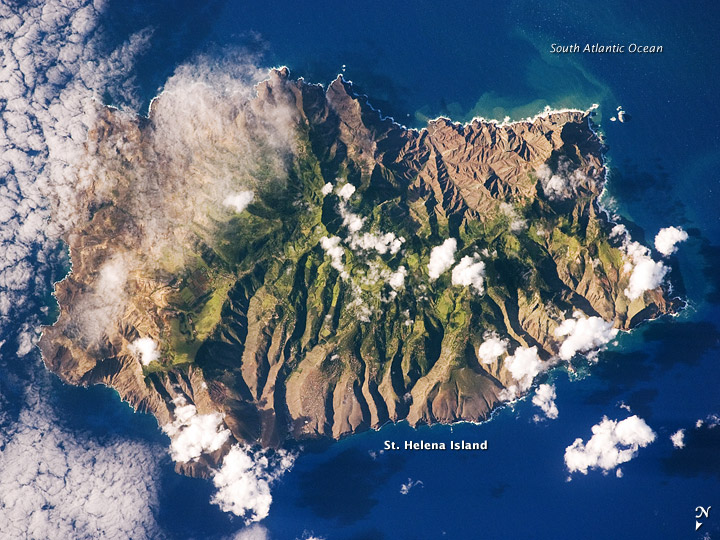 Saint Helena Island, located in the South Atlantic Ocean approximately 1,860 kilometers (1,156 miles) west of Africa, was one of the many isolated islands that naturalist Charles Darwin visited during his scientific voyages in the nineteenth century. He visited the island in 1836 aboard the HMS Beagle, recording observations of the plants, animals, and geology that would shape his theory of evolution. This image was acquired by astronauts onboard the International Space Station as part of an ongoing effort (the HMS Beagle Project) to document current biodiversity in areas visited by Charles Darwin.

This astronaut photograph shows the island’s sharp peaks and deep ravines; the rugged topography results from erosion of the volcanic rocks that make up the island. The change in elevation from the coast to the interior creates a climate gradient. The higher, wetter center is covered with green vegetation, whereas the lower coastal areas are drier and hotter, with little vegetation cover. Human presence on the island has also caused dramatic changes to the original plants and animals of the island. Only about 10 percent of the forest cover observed by the first explorers now remains in a semi-natural state, concentrated in the interior highlands.

Saint Helena Island is perhaps best known as the place where Napoleon Bonaparte I of France was exiled following his defeat at the Battle of Waterloo in 1815; he died and was buried on the island in 1821. Later, his remains were returned to France. Today, the island is a British Overseas Territory, with access provided thirty times a year by a single ship, the Royal Mail Ship St. Helena.

Astronaut photograph ISS019-E-14918 was acquired on May 7, 2009, with a Nikon 2DXs digital camera fitted with a 400 mm lens, and is provided by the ISS Crew Earth Observations experiment and Image Science & Analysis Laboratory, Johnson Space Center. The image was taken by the Expedition 19 crew. The image in this article has been cropped and enhanced to improve contrast. Lens artifacts have been removed. The International Space Station Program supports the laboratory to help astronauts take pictures of Earth that will be of the greatest value to scientists and the public, and to make those images freely available on the Internet. Additional images taken by astronauts and cosmonauts can be viewed at the NASA/JSC Gateway to Astronaut Photography of Earth. Caption by William L. Stefanov, NASA-JSC.